WHAM-TV, a part of Sinclair Broadcasting, is a DMA 76 station based in Rochester, New York. Our client, Tandoi Asphalt & Sealcoating, was looking to identify leads looking to install a new driveway. There was a lot of untapped potential in the market, and we knew we could generate excitement with homeowners by running a stellar giveaway!

This was the first time we had partnered with Tandoi, and they couldn’t have been more excited to sponsor the contest. The contest encouraged homeowners to submit pictures of their run-down driveways in hopes they’d be chosen as the driveway in most dire need of repair. 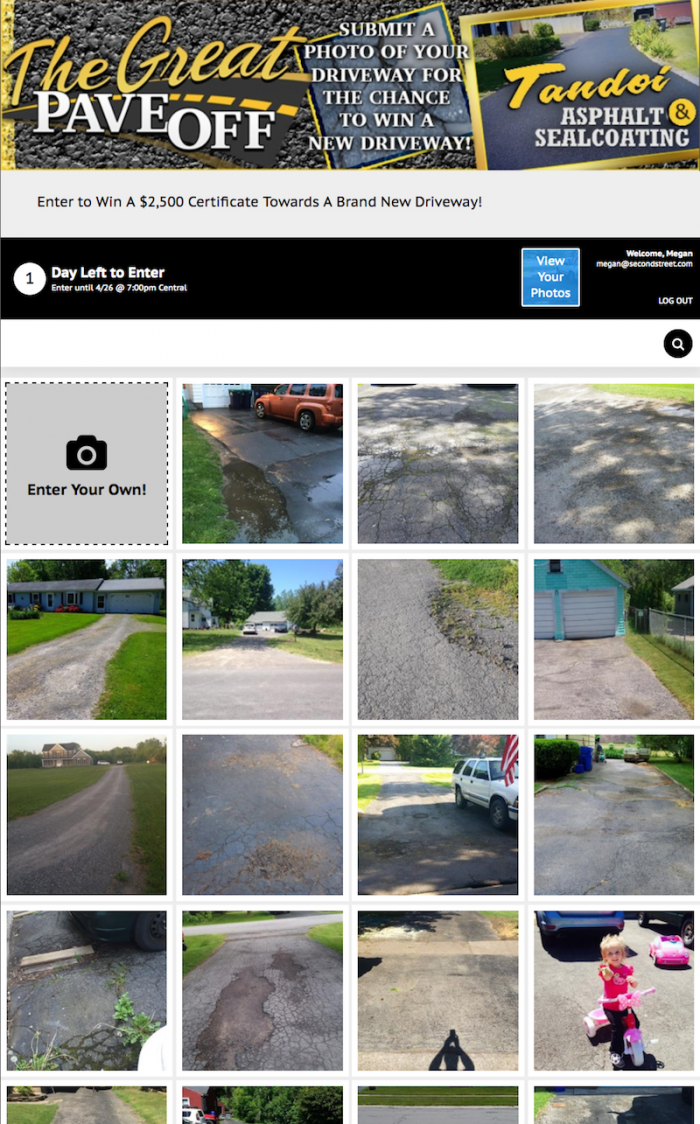 We know a great prize drives great participation, so we made sure the sponsor would be able to provide something substantial to drive qualified leads. Not only did Tandoi provide the winner with a $2,500 voucher towards a new driveway, but they also offered a $500 voucher for the second place winner and a $150 voucher for third place.

We started the contest with a submission period. After the submission had ended, station staff met with representatives from Tandoi to narrow the field to ten finalists based on the photo submitted and the need expressed. Viewers were then focused on voting daily for one of the Top 10 Finalists. The finalists were able to actively campaign for votes from friends, family, and local community groups.

This contest was perfect for the advertiser because every cracked driveway submitted was a potential lead for Tandoi. To capture as many of these leads as possible, we added lead-gen survey questions. 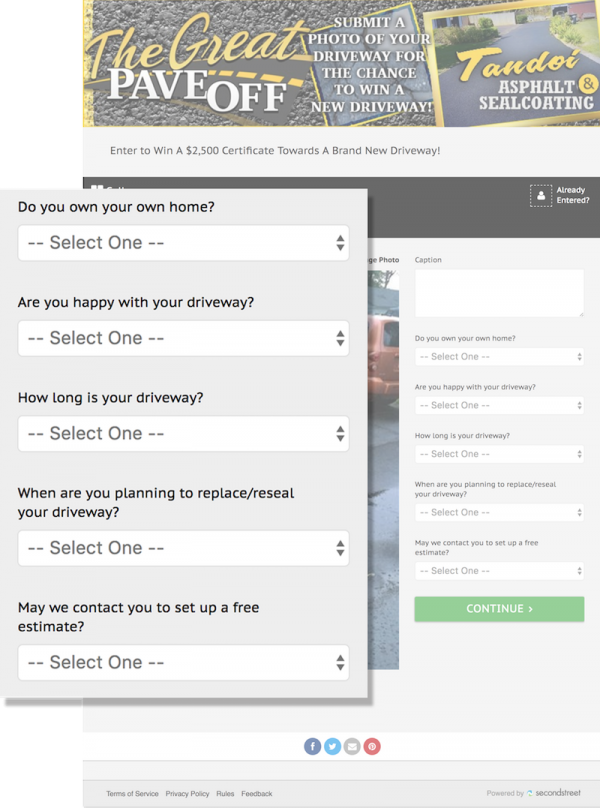 In addition, we included an email opt-in and optional Facebook Like boxes for both ourselves and for Tandoi Asphalt & Sealcoating. 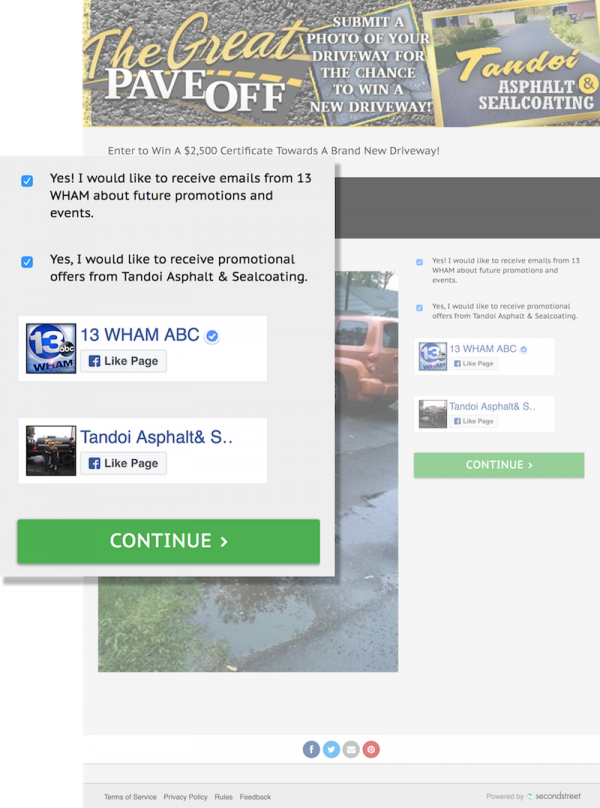 Our marketing approach centered around on-air promotion. We made sure to mention the contest multiple times during broadcasts and even showed the winning driveway on-air after the contest ended. 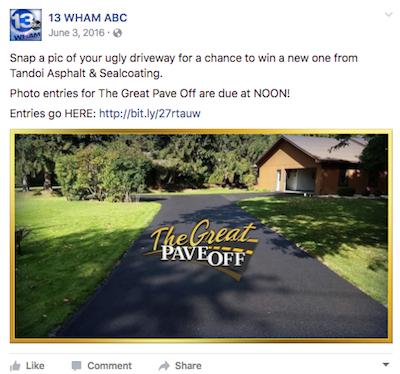 In addition to posting on our Twitter and Facebook pages. We made sure to send targeted emails to our database. We’ve learned in past campaigns email is the #1 way to activate potential participants, so we knew this would feature in our strategy. 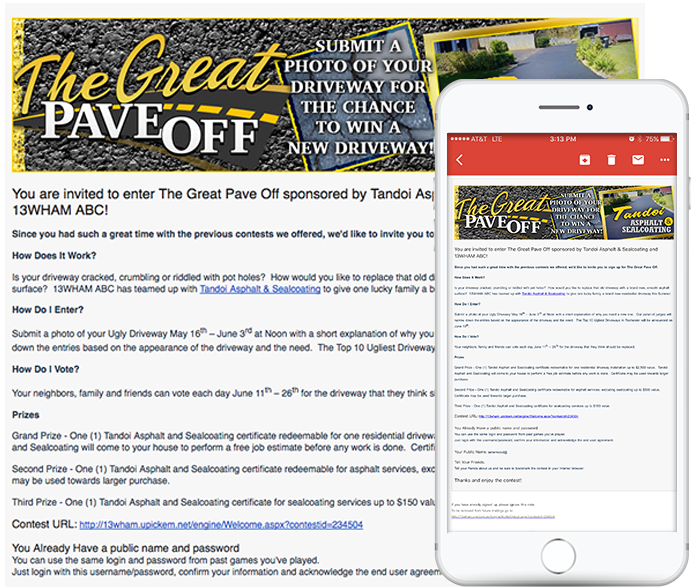 Our client couldn’t have been happier with the results. The contest pulled in over 2,000 votes from 550 registrations. Additionally, the sponsor generated 148 new email opt-ins, which they will seed their new email database.

But the big win came from all the qualified leads generated from the contest. The advertiser was so busy, they couldn’t even get to all of the 66 free estimate requests! 36 of these were directly from the photo entries with an additional 30 leads from voters.

After following up with the leads, Tandoi Asphalt & Sealcoating attributed $250,000 in booked business directly from The Great Pave Off photo contest and the associated TV campaign that complemented their contest campaign.

The contest was a win for WHAM as well, as we were able to generate $5,000 in revenue from the sponsorship package. Even though this was the first time we partnered with Tandoi, we are incredibly excited that they have already signed on to do this engagement campaign again!

This type of photo contest could work anywhere, and we were thrilled with the results. In the video below, you can take an in-depth look at how this engagement campaign impacted the community, in addition to interviews with the advertiser and the contest winners.

*Editor’s Note: This photo contest was the winner of Campaign of the Year for the 2016 Second Street Awards.