At this year’s Second Street Awards, we recognized the best polls of 2017.

With the release of polls just this year, we’ve seen partners doing amazing things already. This new tool is creating a unique way for media companies to connect with their audience and find a quick way to get their insight on hot topics.

Check out these seven polls to help you find inspiration of your own: 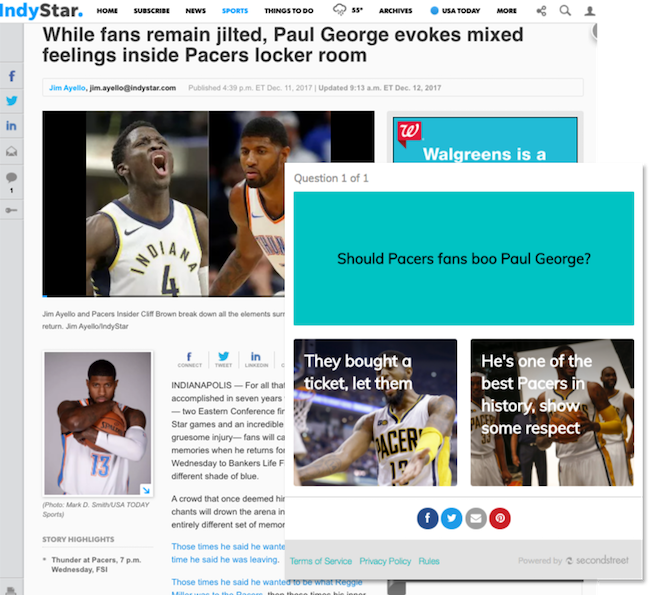 The Indianapolis Star is turning polls into a big engagement opportunity for their sports editorial team. Whenever there is a hot topic, they’re quick to attach a poll to their sports coverage and let their audience weigh in with their opinion. In this case, with the controversial return of a recently traded basketball player, their poll garnered 1,800+ responses. 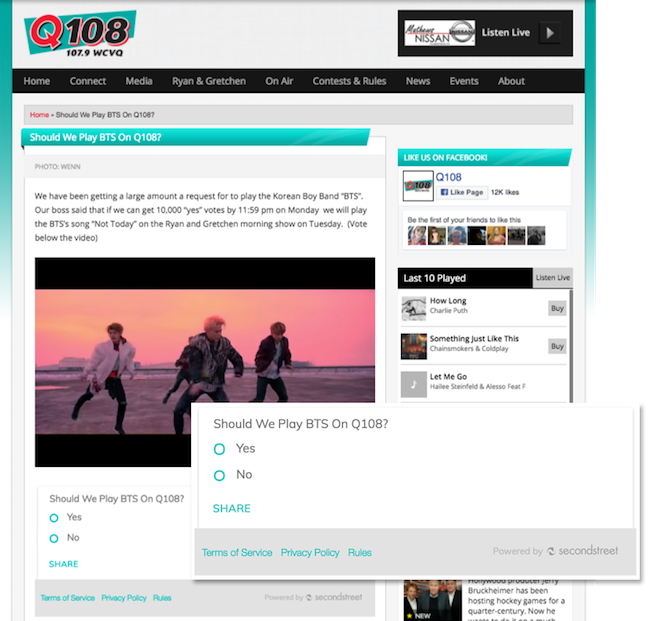 When Korean boy band BTS started trending in the music world, WCVQ-FM in Clarksville, TN wanted to find out if their listeners thought they belonged on their station. Hoping to tap into the massive social following of BTS and drive website traffic, the station created this poll embedded on a page with the group’s popular song. More than 1,000 people answered the poll – and every single response was “yes!” 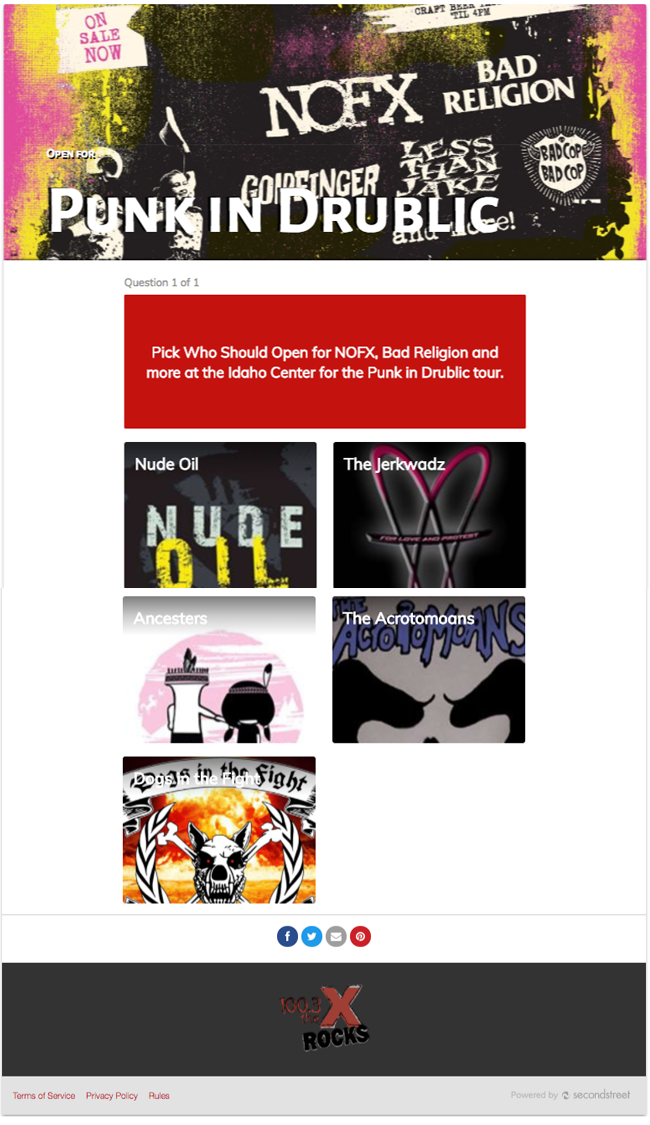 To help promote the upcoming craft beer and music festival, KQXR-FM ran a poll to see which local band should open up the festival. Each of the five bands wanted to win, so they heavily promoted the poll to their own social media following. Before it was over, the poll attracted nearly 5,000 responses and also added 340+ new addresses to the station’s email database. 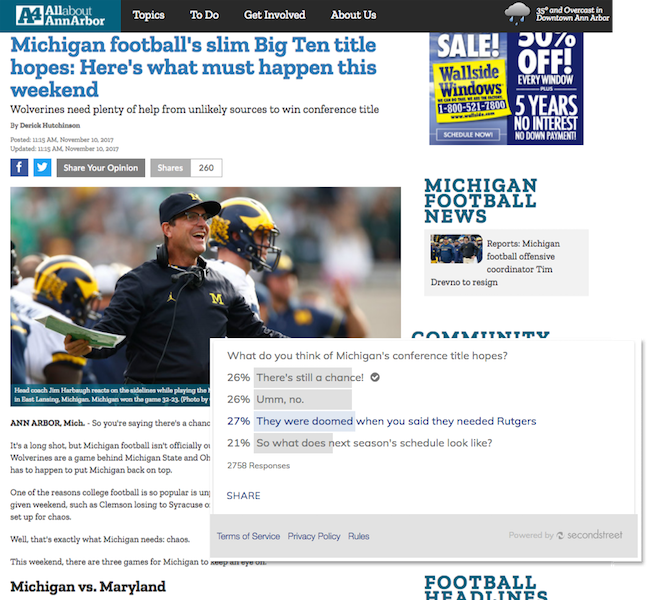 Local sports teams always attract a large fanbase. As the Michigan State football team prepared for some of their biggest matchups of the season, fans were anxious to see if they had a chance to win the conference title. WDIV-TV’s local site – All About Ann Arbor – ran this poll within an article all about their upcoming games. With more than 2,700 responses collected, local fans were pretty evenly split about the team’s chances.

What restaurant would you like to see open in the former Demos’ location? – Saga Clarksville 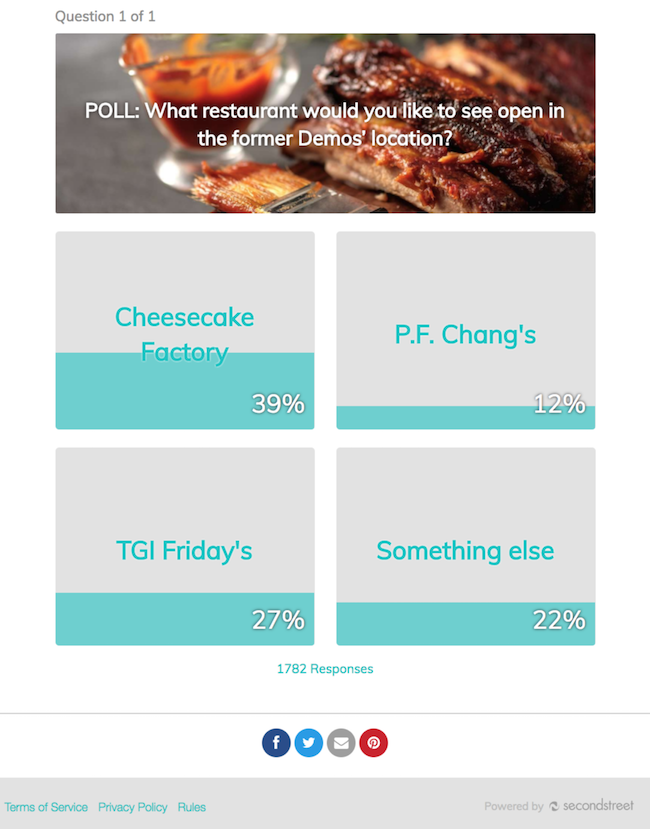 Looking for a way to grow their email database and get their audience talking, ClarksvilleNOW.com turned to a poll. With space opening up from a local restaurant closing, their audience was eager to share their idea for what should go in its place. This simple poll earned 1,700+ responses and drove in more than 460 new email addresses for the station’s database. 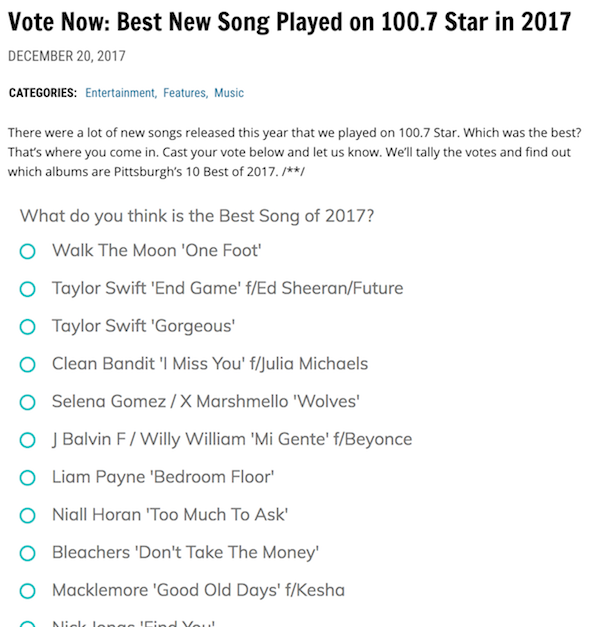 The end of the year provides the opportunity for excellent content. At WBZZ-FM, they created a poll featuring all of the top songs released that year and asked their listeners to vote on which one should be crowned #1. Not only did 1,500 people participate in the poll, but WBZZ was also able to find out some great data about the most popular songs on their station. 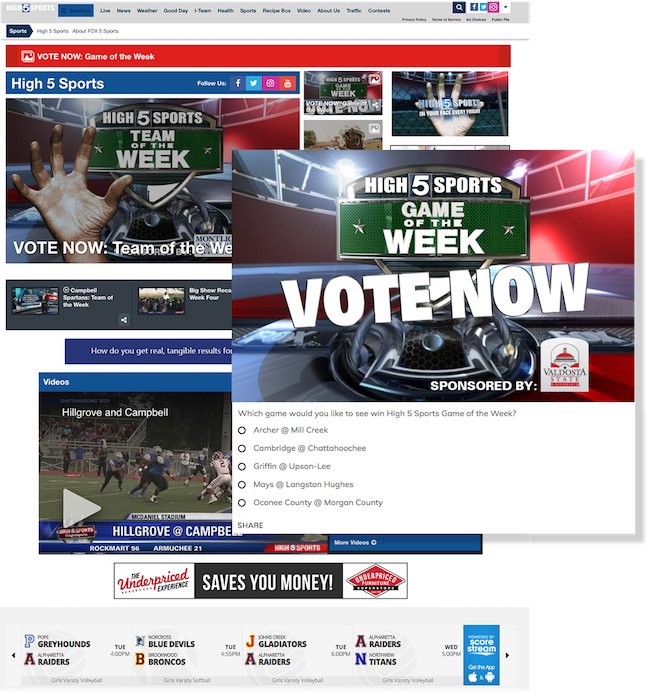 No matter the community, high school sports always draw out a passionate audience. For WAGA-TV in Atlanta, GA, the sports programing department is using weekly polls to find out the Game of the Week and Team of the Week to be featured on-air. These polls are attracting huge participation numbers each week.

Polls are quickly becoming one of our favorite ways to enhance the content your team is already doing. With just a few clicks, you can turn any article into an interactive experience your audience will love to participate in.