At this year’s Second Street Awards, we recognized the best polls of 2019.

Polls continue to be an incredible engagement tool our partners are using daily to get feedback from their audience – especially those content and editorial teams!

Check out these great example of how polls can be used not only as an engagement tactic, but also a way to uncover valuable data.

This recurring Be the Boss poll from WXKB-FM is a great example of how polling can influence your content. Each weekday, WXKB gave their listeners the chance to pick the winning song, which was then played on air. This daily recurring poll campaign has brought in over 9,000 responses and consistently drives a 60% opt-in rate for the station email list. 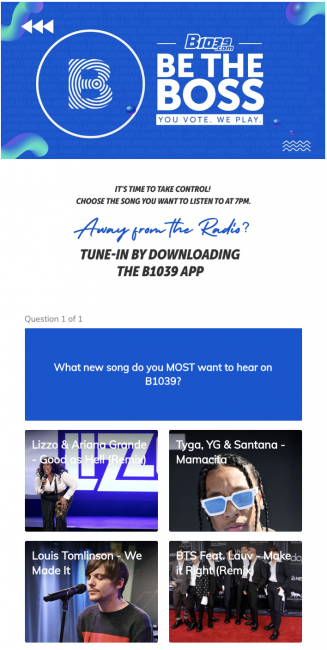 When The Pitch created their Editorial Voter’s Guide, they included a poll to engage their audience with the topic. They asked their readers, ‘Who are you voting for?’ to gauge their opinions on mayoral candidates. This was a great way to showcase a community issue and involve readers in their content.

Which White Bread is Best? Poll

When the Post and Courier released a story on the top 10 white breads available in the area, they used a simple poll to engage their audience with seemingly bland topic – white bread. Simple, silly topics are great for polls because everyone has an opinion to share! And, it’s easy to turn that into complimentary content for your media company. 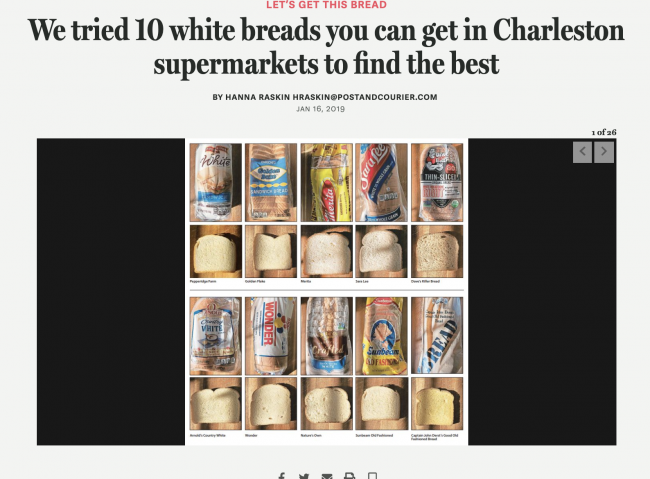 How Would You Reimagine the Loop Trolley?

St. Louis Magazine included this poll in a story covering the St. Louis Loop Trolley controversy, where a trolley initiative failed and the city needed to do something else with the trolleys. The magazine asked their readers to vote for a creative solution to the community issue and collected nearly 400 responses. This also helped grow four of the magazine’s email lists! 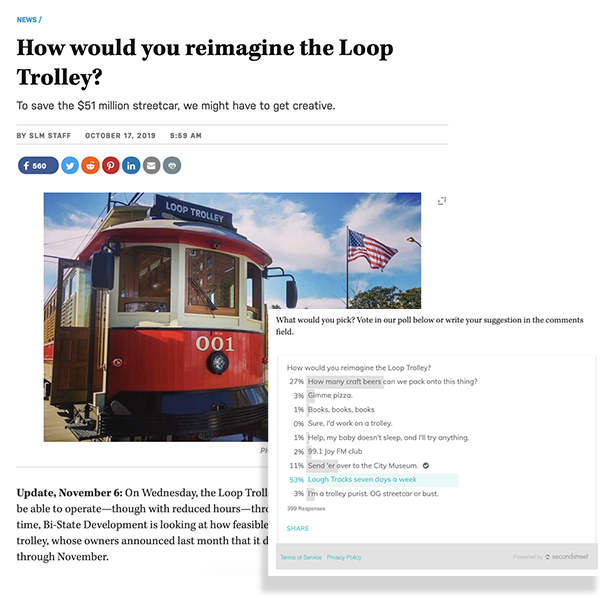 WAGA-TV’s High 5 for Teachers initiative was a great chance to support local high school teachers and secure a sponsor, an injury attorney, looking to align with the community. They asked their viewers ‘Which teacher do you believe should be this year’s High 5 Teacher?’ and received over 43,300 responses! The winning teacher received a $2,500 donation to their school, courtesy of the sponsor. 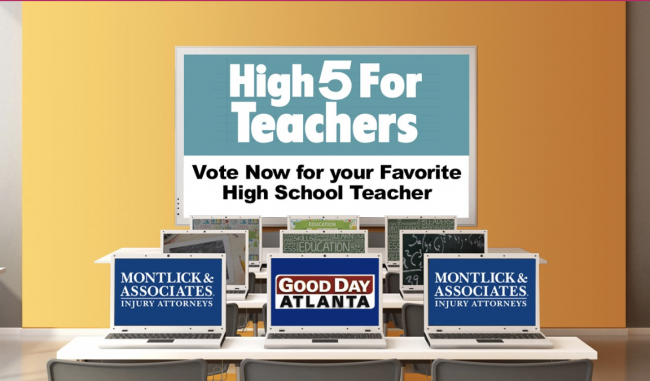 While working on a story covering the changes to the official New York license plate, WTEN-TV used a poll to get valuable feedback from their audience. Over 2,230 viewers entered the poll and, while the poll was not state official, it gave the station tons of options for creating additional content around this topic.

Magazine’s have the unique opportunity to engage their audience with their cover photo and using a poll allows you to show the image options when users vote. Denver’s Mile High Magazine ran this poll to let their readers choose the next cover photo dog model. The poll consisted of photos of two Instagram-famous dogs and drove nearly 6,300 responses! 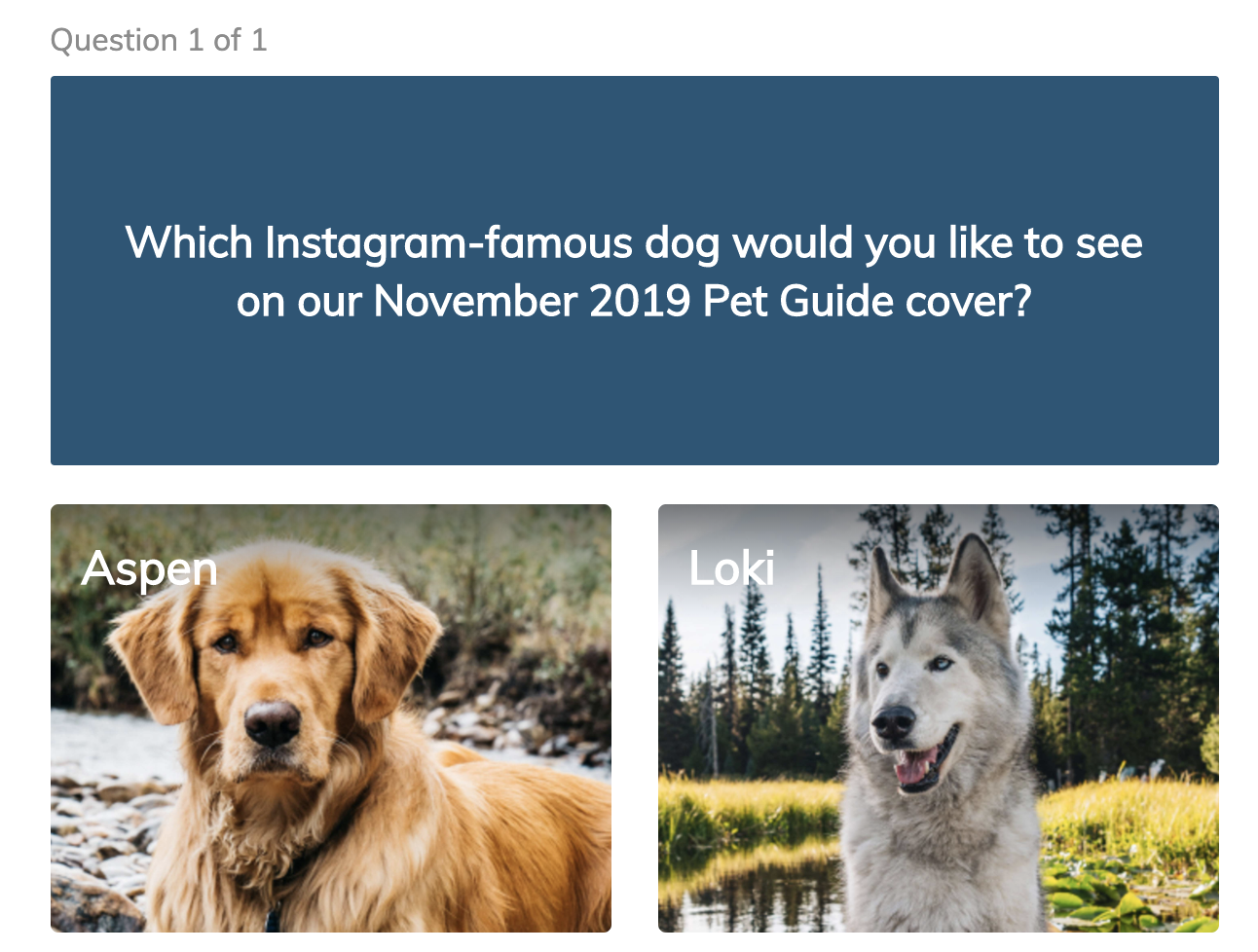 This is another great example of the power of sponsored polls. To sponsor their local football Player of the Year poll, KTAL-TV secured the local Chevy dealership. This was a perfect partnership as auto dealers love the chance to align with local sports. The simple, one-question poll received over 24,500 responses from the community. 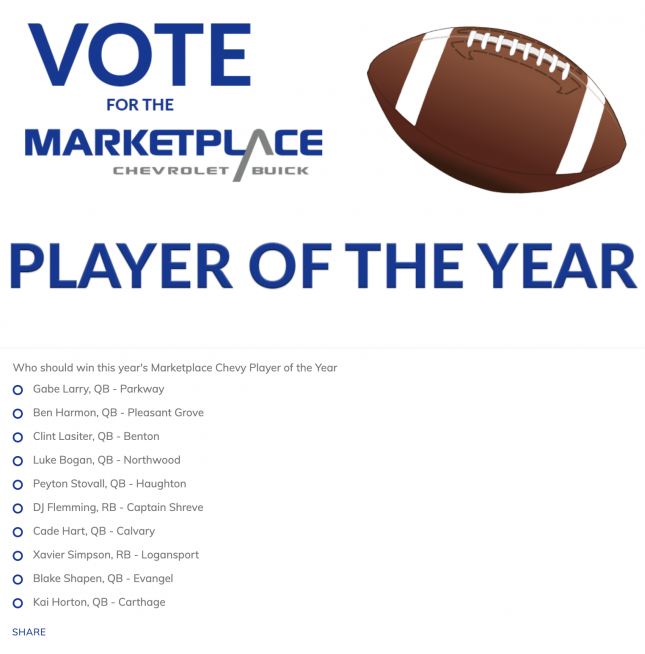 Discover how you can make your content into an interactive experience with the addition of a few polls.

Tim is the Director of Email Success at Second Street and has extensive background in media. Tim is dedicated to helping local media companies find success through their email programs while leveraging promotions to grow their database and achieve their company's goals.