At this year’s Second Street Awards, we recognized the best photo contests of 2019.

Driving huge engagement and revenue is easy when you run a photo contest with a theme related to your audience. These top photo contests were not only creative and engaging, but also had great results for the media company and its advertisers.

Check out the variety in the 2019 award-winning photo contests:

This inventive photo contest from WDTV came from the need to create a promotion to entice our local Honda dealership, the owner of which has a soft spot for dogs. The Dog Walking Forecast runs twice during each morning news segment and includes a different submitted picture every day. More than 230 viewers submitted a photo of their dog for the contest and 17 of those users identified as in the market for a car and asked to be contacted by the dealership with their current deals! This campaign was a barking success and generated $10,000 in sponsorship revenue for the station. 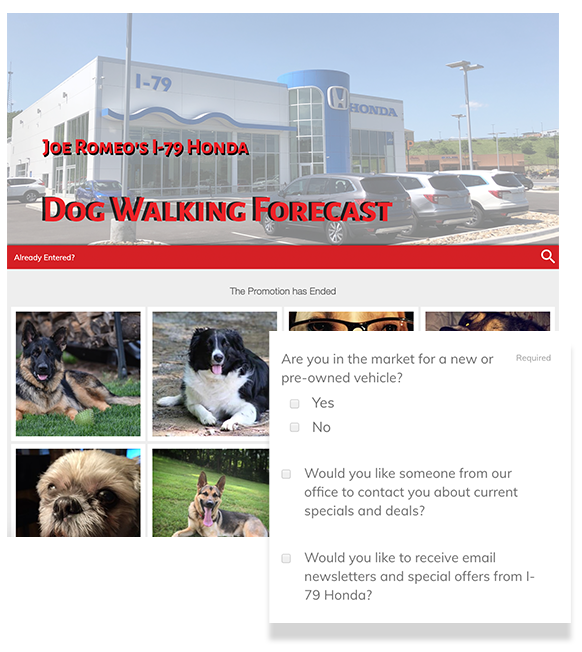 To celebrate its 65th year, KRDO designed this 65-day contest to ask viewers to share their photos of memorial moments in Southern Colorado. They arranged 65 daily prizes (nine prizes from each of seven prize sponsors) as well as the grand prize sponsor provided a hot tub valued at $8,000. Not only did the station engage their audience, celebrate their anniversary, but they also obtained some great content for the news team. Plus, they generated over $10,000 in sponsorship revenue from this campaign. 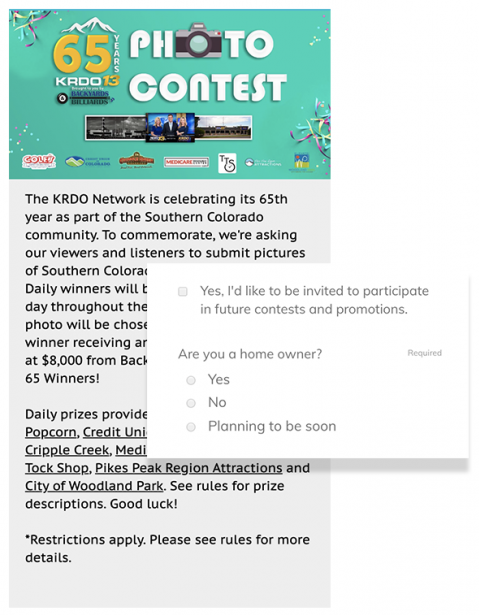 This Yard Shaming photo contest from WTAT-TV was an out of the box approach to get their viewers to share their “shameful” yards. Those who submitted their photo were entered to win a $5,000 yard makeover prize. The station secured five sponsors for this campaign including furniture, pool, landscaping, contracting and wired installations companies. The contest collected nearly 100 entries, over 300 votes, and generated $12,000 in sponsorship revenue for the station. 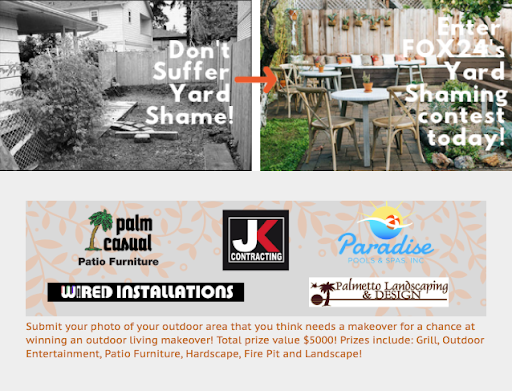 The Peoria Journal Star secured a local OB/GYN office to sponsor their Cutest Baby Photo Contest photo contest, which was a perfect fit for this audience. The campaign included prizes for the top three finishers which drove 165 entries and over 2,4000 votes. With an email opt-in and a lead-generation question on the registration form, 67% of those users opted-in for sponsor emails and 14 users were identified as leads looking for a new OB/GYN. To top it off, the paper generated $3,500 in sponsorship revenue! 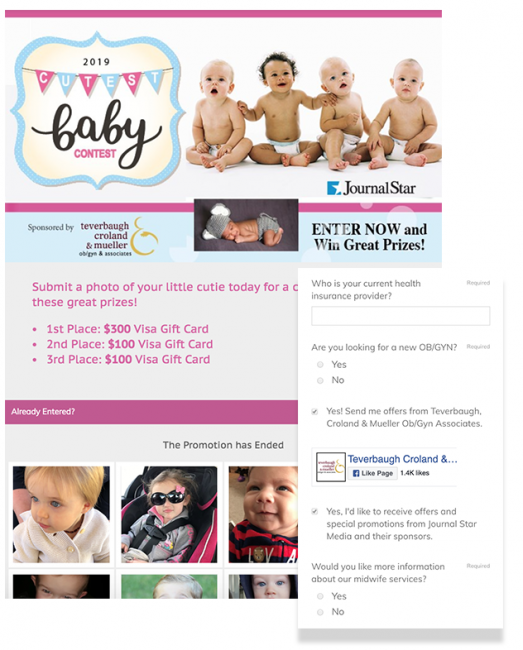 Magazines have the unique opportunity to utilize their covers to engage their audience with a cover contest. The Tulsa Kids Magazine ran a fun photo contest to find their next cover photo! magazine secured a local jewelry boutique, The Vintage Pearl, to sponsor the contest. All participants were entered to win one of two gift bags from the sponsor, each containing jewelry and a gift card ($75 value each)! Nearly 200 photos and over 4,100 votes were submitted and both the magazine and sponsor received over 900 opt-ins for their email lists.

Back To School Smiles

The Herald | Jasper, IN

Working with a local dental group, the Herald created this ‘back-to-school’ themed ‘smile’ photo contest. This idea was perfect for the sponsor, a local family dental office, to generate leads. They gave away three prizes, the grand prize being a new laptop, which drove 265 photos entries and 5,400 votes. The registration form included two lead-generation questions for the advertiser, which identified 470 users asking for the advertisers exclusive offer. 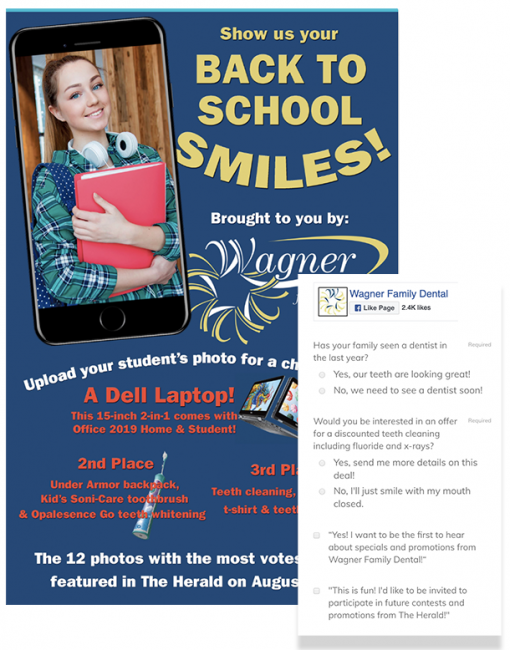 This ‘Renewal of Vows’ photo contest from the Carroll Times Herald was a fantastic feel-good promotion. The paper asked their readers to submit a photo of a couple and their story for a chance to win them a free vow renewal. Users then viewed the gallery of entrants, read their love stories, and voted for their favorite to win the prize. The sponsoring business was an assisted living facility, which was a perfect fit for the target demographic. Over 2,000 votes were submitted and the sponsor was able to use lead-generation questions to identify nearly 100 users interested in volunteering with them and nearly 200 leads for residents. 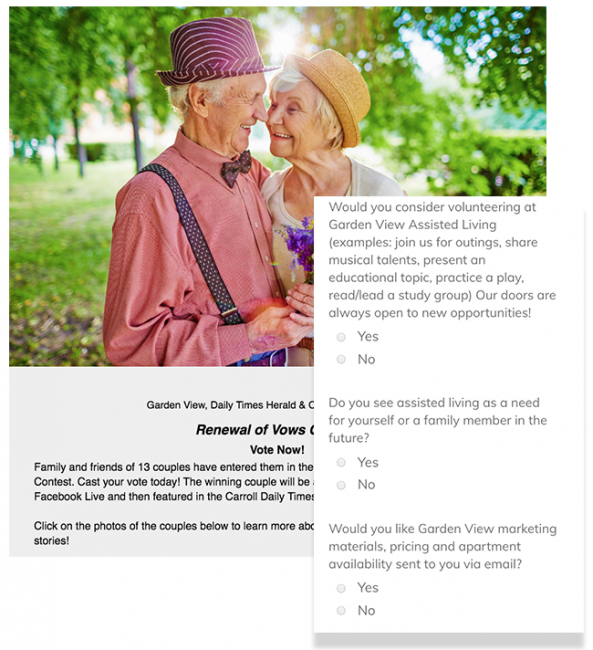 Back to School Photo Contest

Back to school season is a perfect opportunity for photo contests – parents often already have first-day photos on their phone. The Herald-Mail secured eight local businesses to sponsor their back-to-school photo contest; two local auto dealerships signed on as title sponsors and six other businesses (community college, health center, pediatrics office, ballet school, and playhouse) co-sponsored the promotion. The title sponsors received three lead-generation questions as part of their sponsorship package, which identified 80 customer leads and 47 users interested in employment. What’s more, this campaign generated $15,000 in sponsorship revenue for the paper. 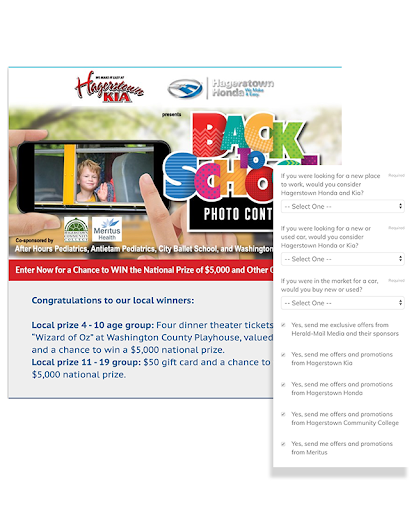