The Florida Times-Union is a daily 157K circulation paper in Jacksonville, Florida. We have been running promotions and interactive content for a few years and had lots of proven success. We wanted to take advantage of the excitement around our local professional football team – the Jacksonville Jaguars – and decided to kick off the season with our first ever pro football pick’em.

We hoped this 21-week campaign would bring us 5 months of revenue and engagement and lead to a significant increase in our overall revenue. We also hoped this extended campaign would open up new advertising opportunities for us.

After watching the football webinar, we got planning just in time for football season. Taking advantage of the fan loyalty to the Jaguars, our football promotion was a no-brainer. We had a big kickoff for the entire Times-Union Media sales team. We created excitement by having a “tailgate” theme, complete with wings and a contest for those who sold packages that included cash spiffs!

We also added 16 Sunday night match-up turnkey quizzes with some of the advertiser packages. These quizzes tested people’s knowledge of football stats between the two teams that played each other for a specific week. For example, “What year did they first play each other?” and “Which team has the most wins against the other?” were questions that were asked.

With a tiered sales layout, we armed our sales team with printed copies of “playbooks” that explained all that was included in each level and showed screenshots of the game itself and the marketing we were going to put behind the campaign to encourage local participation. For our title sponsors, we sold a $25K package which was $5K for five months. We also sold $10K, $5K, $1K, and $500 packages for sponsorships as well. 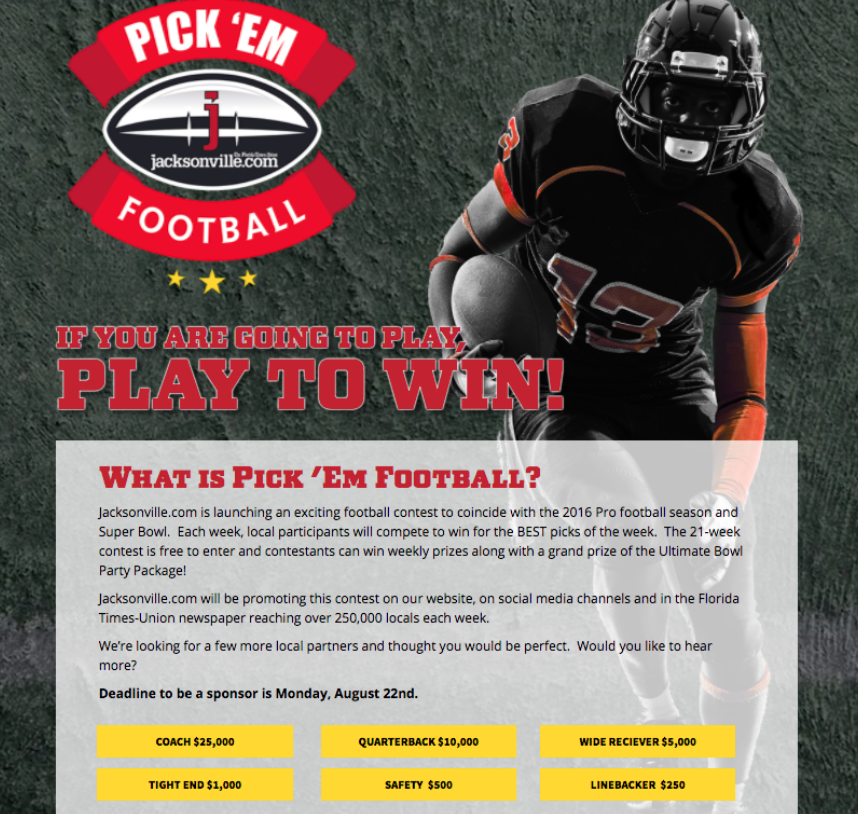 To market the game locally, we took an integrated approach. This included our website, social media pages, email, and even more traditional forms of advertising. We had a homepage takeover on our website that put our engagement campaign at the forefront of our readers’ screens and minds. We also utilized email; but the greatest part of our advertising was the unique and revitalized use of more traditional outlets. 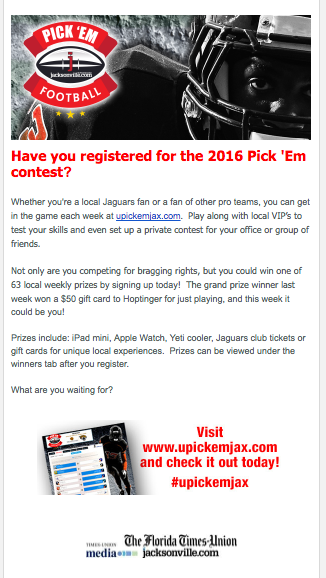 A great asset we had for those fans were incredible prizes from our sponsors. Every advertiser gave prizes for the pro football campaign, and they loved doing this. In fact, some local advertisers wanted to donate prizes even if they weren’t a sponsor. Some of these included Yeti merchandise, a dinner for 10, and a craft beer tasting. The better the prize, the better response we saw on social media when we posted about it.

We could not be more pleased with the results of our very first football campaign. We now have 60 new advertisers in addition to $50K in revenue. These numbers will only increase as we go into our second year of football engagement campaigns.

This year, we plan to run the 21-week pick’em again, as well as season-long quizzes that are more evergreen than just weekly match-up quizzes. In addition, we want to run more Jaguar-specific quizzes to amp up our local fans for Jacksonville’s team. You can also find success like we did if you take advantage of all that football season has to offer!

Moneek Langston is the Digital Media Sales Manager for Times-Union Media in Jacksonville, Florida. With a background in advertising, she strives to succeed in digital marketing and consulting small businesses to win more customers and market share in the Jacksonville area.