KKFN-FM is a sports radio station out of Denver, Colorado. Our station broadcasts the college basketball games already, so we were looking for a way to engage with listeners and extend our on-air programming as well as generate revenue from the excitement around the bracket tournament in March.

By using a category exclusive sponsorship model, we chose to partner with four different category sponsors – a sports bar, a college, a tax preparer, and a urology center. Limiting our package to these four categories helped us to secure our sponsorships quickly.

We created an integrated sponsorship package leveraging all of our assets, both on-air, online, and onsite at the advertiser’s location. One of the most appealing and effective aspects of the package was the inclusion in the email campaign. It’s been proven time and time again that email is the #1 driver of digital conversions.

Each sponsor had specific goals they wanted to achieve which made them perfect candidates for our basketball bracket.

Urology Center: They wanted to target a male audience to bring in even more vasectomies this year since March is their peak season. The first half of the campaign leading up to the tournament encouraged the audience to enter by saying this would give them a chance to watch basketball for a few days during recovery. In addition, the health center was our primary sponsor of our 2nd Chance Bracket. The campaign switched at the Sweet 16 to play off our survivor-style bracket, and we pushed vasectomy reversal with the slogan, “The Fan is giving you a second chance at your bracket and a second chance at having a family!”

Sports Bar: They wanted a promotion that could drive traffic and sales, while using some of the money liquor and beer distributors earmarked for promotions.

Tax Preparer: They were looking for a way to grow awareness about their services prior to the IRS filing deadline of April 15th.

Media College: They wanted to target an audience interested in their broadcasting program and advertised, “By this time next March, you could be calling the action!”

To promote our contest, we begin promoting in February and leveraging our on-air personalities and our sponsors as VIP Pickers. We even included celebrity picks, so last year you could compare your picks to President Obama.

One of the biggest reasons we get such high participation numbers is from office pools that use our private groups. Early in February, we encourage people to run their own pool on our site. The more groups we get running on our site, the more successful our entire bracket is.

We also promoted through onsite viewing parties and live broadcasts at Tilted Kilt for the first four games. The bar was packed for each one.

The entire campaign was a huge success for both us and all of our sponsors. The Urology Center of Colorado, saw 50 vasectomy procedures directly from the campaign, the Colorado Media School received more than 100 qualified leads, and both the sports bar and tax preparer saw an increase in business as well. Not to mention, our station earned $40,000 in revenue from the sponsorships. 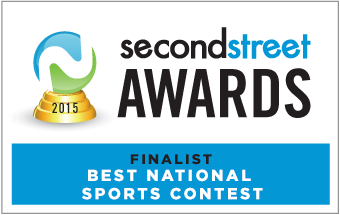 KKFN’s 2015 Bracket Challenge was a finalist for Best National Sports Contest at the 2015 Second Street Awards.

JJ is the Director of Promotions for Bonneville Denver. Previously, he was the Assistant Program Director for KKFN-FM, and has produced and executed engagement campaigns with great success for many years.