*Editor’s Note: This promotion was a finalist for Best Photo Sweepstakes at the 2015 Second Street Awards.

KNDD-FM (107.7 The End) is an alternative rock radio station in Seattle, Washington, operated by Entercom Communications.

Odin Brewing Company (a new advertiser for us!) wanted a promotion that would celebrate the launch of their new beer can packaging, promote their new branding, and build excitement from their distributor and retail partners.

Inspired to deliver these goals for our new advertiser, we suggested running a photo sweepstakes. This would be a great way to achieve our advertiser’s brand awareness goal, as people would snap and share photos of the new cans.

The contest itself was easy for us to set up and for people to enter. For two months, participants could post a photo into the contest of themselves with an Odin beer for a chance to win a $2,500 prize.

Our sponsor provided a grand prize of $2,500 for the winner with the intention of sending them to a Seahawks vs. Vikings game. Because our client is based in the Washington area, we knew that advertising this game as the prize would attract their primary customers to participate.

To kick off the contest, we held a viewing party for the Sunday Night Seahawks vs. Packers game hosted at the brewery. The event itself was free; however, we also sold an offer through our ecommerce platform, getmyperks.com, where people could receive a BBQ dinner, a beer, and a growler to take home. 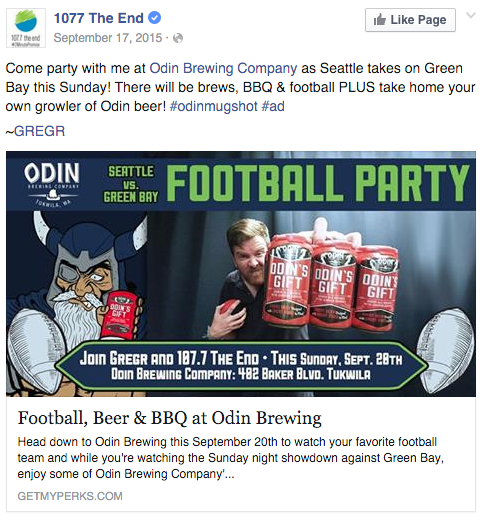 At the viewing party, attendees had the opportunity to be the first contest entrees. Odin hired people that dressed up like Vikings and supplied props for people to use to take photos, which drove an enormous amount of participation.

In addition to the kickoff party, we promoted heavily on air, by posting on our social media pages, on our website, and through email.

Including earnings from the 70 kickoff offers we sold, this promotion generated a total of $22,000 in revenue!

A photo sweepstakes turned out to be the perfect means of achieving our advertiser’s goals. While the nature of social sharing encouraged an enormous amount of participation, the promotion also generated awareness and excitement for the brewery’s new beer can packaging.

We also got a lot out of this experience. Having a cash prize, a kickoff event, and great branding launched our promotion into success and has given us the insight to make subsequent promotions even more successful.

Brian is the marketing firestorm behind the Entercom Seattle’s radio brands. Brian has a wealth of knowledge on every promotional blockbuster Entercom Seattle has produced in the last 10 years.