The contest also received twice as many entries than it did in its first year!

WRAZ-TV (FOX 50), part of Capitol Broadcasting, is a DMA 25 television station in Raleigh, North Carolina. The popular broadcasting network has been running contests since early 2008.

FOX 50 first ran their Tailgate Takeout man cave giveaway in 2012, and it was so popular and successful that they decided to bring it back in 2013.

The Hardee’s Tailgate Takeout Prize Pack consisted of $50 worth of Hardee’s coupons, and one was given away each week for the duration of the contest. Viewers could enter the sweepstakes to win the weekly Prize Pack once each day, and each weekly sweepstakes entry was also automatically entered into an overall drawing for the Grand Prize – The Hardee’s Ultimate Mancave! The Ultimate Mancave was awarded at the end of the promotion and consisted of a brand-new big screen LCD TV, a brand-new recliner, and a year’s supply of Hardee’s chicken tenders.

Since the contest started over with a new prize each week, viewers returned to FOX50.com again and again in order to enter every day.

FOX 50 covered the contest page with Hardee’s branding, ads (like the banner ad pictured above), and links pushing to their own website. The station also promoted the contest with run-of-site ads on FOX50.com, but pushed it even more during their NFL and College Football games. They also promote heavily on Facebook, and you can see a sample Facebook post below. 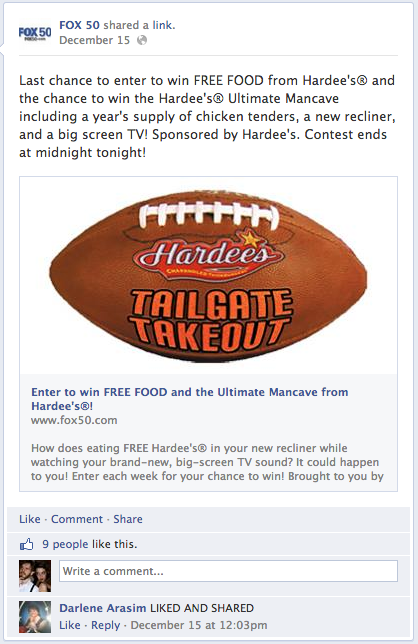 The Tailgate Takeout giveaway received 647 entries (double what the promotion generated its first year) and 1,161 pageviews on the contest page.

FOX 50 generated over $100,000 in revenue with the Tailgate Takeout giveaway, and they were also able to sign Hardee’s on for other promotions throughout the year.

In fact, Hardee’s had been so thrilled with the results of the original 2012 promotion that they not only took the Tailgate Takeout promotion to other local markets in 2013, but also increased their spending with FOX 50, doubled the value of their weekly Prize Pack, and gave away Grand Prize worth FIVE TIMES the value of the 2012 Grand Prize.

No surprise, Hardee’s plans to participate in the promotion for a third time in 2014.