At the conclusion of our second annual ballot, we are now widely considered as the authority of the community’s “best ofs” (and even snagged a Second Street Award for “Best Metro Ballot”). Here’s how we achieved this goal.

Throughout the month of October, the community could access the Best of Forsyth ballot and vote for their favorite 232 community businesses and services. Our audience was required to register in order to participate in the ballot, which provided a huge opportunity for us to collect consumer data and to build our email database through targeted questions and opt-ins.

In order to maximize email opt-ins, we followed best practices by supplementing it with captivating copy, “Be a FCN VIP!” 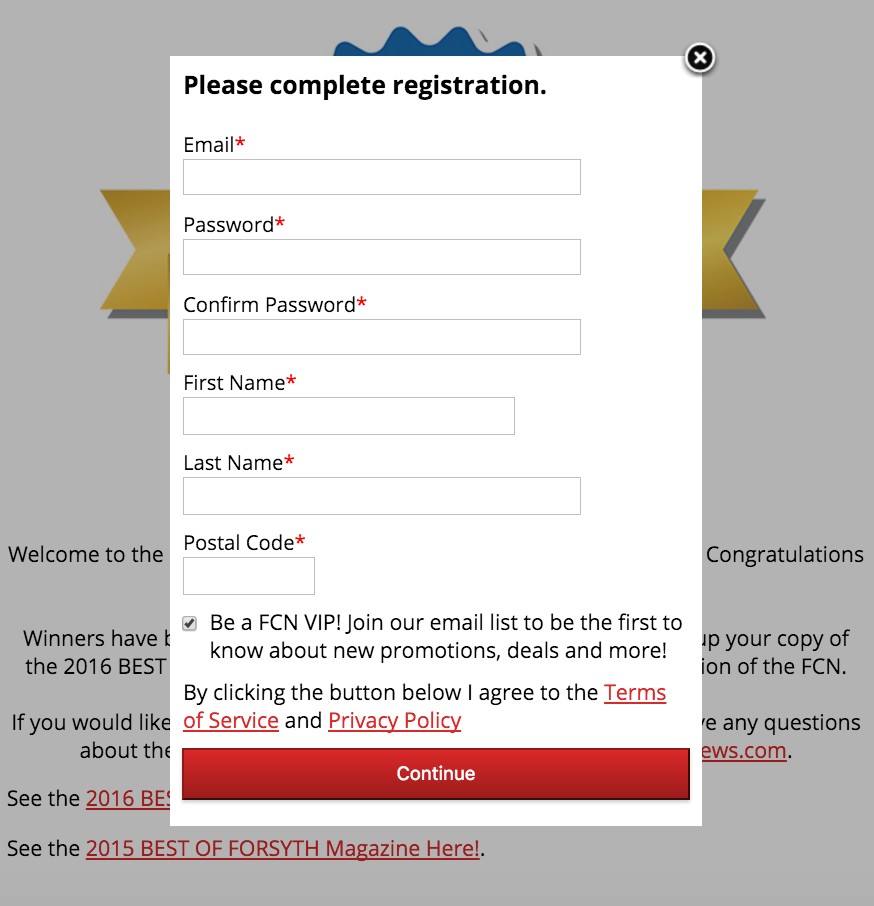 To drive more potential entrants to the registration page, we promoted heavily through print and web ads in the Forsyth County News, social media, emails, and more.

We even provided marketing materials to local businesses so that they could further promote the ballot, such as by creating “Vote For Us” flyers to distribute to nominees. Businesses were so determined to win that they took promoting into their own hands, too. For example, a heating and cooling company redirected their web traffic to the Best of Forsyth registration page and paid for additional advertisements on the ballot itself. Some businesses even made personal videos to encourage more votes! 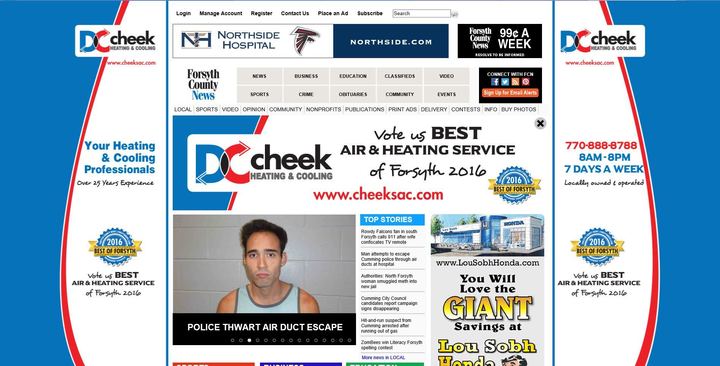 On top of this, because the community took the previous year’s Best of Forsyth so seriously, advertisers recognized the opportunity that this ballot provided and wanted to be a part of it.

We sold sponsorships ranging from $500 to $4,000 that included expanded listings, banner ads on the site, daily site backgrounds on forsythnews.com, and email ads. Additionally, we sold packages of print and online ads that would promote individual nominees, which was a major area of growth from the previous year.

After the voting and nomination periods in the Fall, we announced the 232 winners in January. We unveiled them in a special edition magazine distributed within the Sunday edition of the Forsyth County News.

This magazine, in addition to listing the 232 winners, offered traditional and editorial advertisement spots (spots allowing space for a column written about the advertiser) that the winners could buy to show off their new award and to thank the community for its votes. 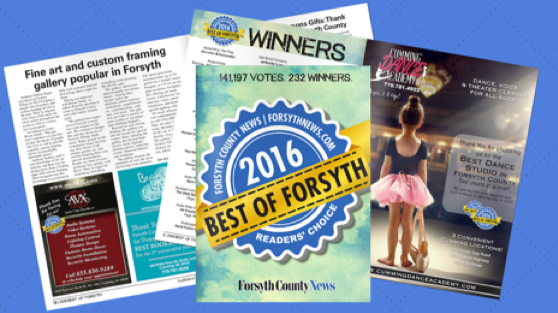 We promoted the ballot results further by personally delivering plaques to the winners’ storefronts. In addition to generating fun social media content, it’s great branding when locals display their “Best of Forsyth” awards all over town! 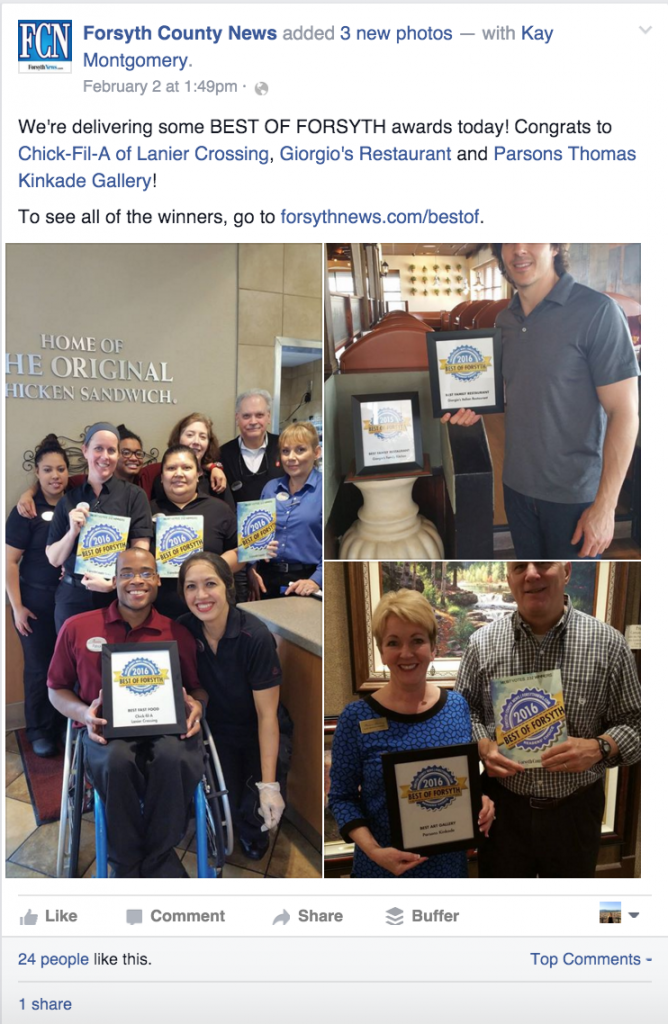 Though the promotion officially ended with the publication of the magazine special issue, it feels as though it’s still going on today – and we’re still generating revenue. The page featuring the winners of our ballot has become an often-visited piece of content on our website. We continue to sell Best of Forsyth promotional packages in a variety of products, particularly through advertisements in our own publications and on our website where winning business thank our readers for crowning them “Best of Forsyth.”

The Best of Forsyth ballot generated nearly $100,000 in direct revenue for our paper – the most revenue of any promotion we’ve run.

The ballot received a total of 141,197 votes for the 232 categories. Plus, we generated a total of 4,474 email opt-ins (48% of the 9,330 users) for marketing, contesting, and targeted email communications. The ballot itself has grown enormously within the past year, doubling in votes from approximately 70,000 to 140,000.

Even better, we saw a 40% increase in sales between the two years we’ve run this promotion. Best of Forsyth has generated a tidal wave of positive momentum for our newspaper. It has instantly increased our authority within our community and our reader engagement.

In fact, our paper won the Inland Press Association, Local Media Association and the Southern Newspaper Publishers Association Mega-Innovation Award due to Best of Forsyth’s success!

Finally, we were thrilled to see how the ballot benefits our local businesses. More than 200 companies’ storefronts, business cards, billboards, Facebook profile pictures, and advertisements in our community display the Best of Forsyth winners’ logo. They’re looking forward to competing in next year’s ballot already!

How were we so successful? We utilized an aggressive digital platform with multiple direct revenue streams for nominees and winners. While competitors received several hundred votes, we brought in 140,000.

Due to the joint force of our voting platform and bold, strong branding, Best of Forsyth rapidly built our audience, our revenue, our customer-base and our perception of innovation. 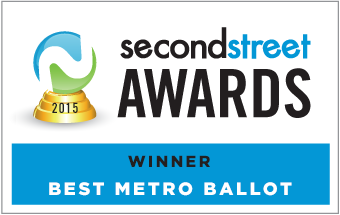 Forsyth County News‘ Best of Forsyth was the winner of the Best Metro Ballot at the 2015 Second Street Awards.