The Small Newspaper Group owns four newspapers in the midwest – The Daily Journal, The Post-Bulletin, The Times, and The Dispatch & The Rock Island Argus. All four newspapers have leveraged a bundled contest package to generate some significant revenue and great results for their advertisers. I recently sat down with Jason Wild, Director of Digital Product Sales, and Ron Hanson, Senior Digital Media Consultant, who shared one paper’s experience in executing this plan. Here’s what they had to say about their work with The Post-Bulletin.

The Post-Bulletin is a 44,000 circulation newspaper in Rochester, Minnesota. They were finding it inefficient for the sales team to go out and sell sponsorships for a contest, and then have to go back out the next month and sell another set of sponsors for the next contest, so they decided to run a series of 8+ sweepstakes throughout the year and get multiple sponsors for each them.

They were hoping that this new model would not only be more efficient for their sales team, but also create more of a sense of urgency for their advertisers since they only had eight spots available in the program. Plus, they hoped to use this new model to target non-traditional advertisers.

They sold the series of sweepstakes to 8 advertisers who participated in each contest throughout the year. Each contest has one title sponsor and 7 supporting sponsors, and the title position rotates each time so that every advertiser has a chance to be the title sponsor.

The model is very affordable for advertisers. Each one pays $250 per month, for a total of a $3,000 investment over the course of the year.

They created a calendar with all of the contest themes ahead of time. They decided on the contest titles by paying attention to the time of year and any relevant holidays or themes. For example, for Valentine’s Day, they ran “A Gift For Your Sweetheart” giving away a Gift Card, and they ran a “Shape Up for Spring” sweepstakes where they gave away a mountain bike. March Madness was “Wild March,” and they gave away a TV.

It was easier to fulfill gift card prizes than actual objects, and they seemed to get much the same response to both prize types. No matter what they were, their prizes tended to be valued at around $200.

Advertisers who had previously sponsored a contest had the first right of renewal. Otherwise, they sold the promotion as first come, first serve, and allowed the advertisers to pick which theme they wanted to be associated with.

Each sweepstakes they sell has a standard promotional package that features:

The title sponsorship position included additional exposure for the advertiser:

All sponsors also received a bank of online display ads (420,000 per sponsor) to run throughout the year with any messaging they would like.

The survey questions in particular were incredibly valuable for the participating advertisers. For example, a window and siding company asked people to indicate which home improvement products they would like to be contacted about. They generated 35 hot, qualified leads, most of which were for high-ticket items like window replacement. 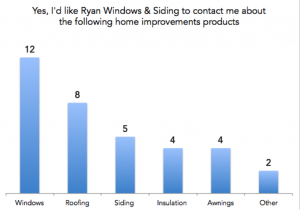 Another advertiser, a flower shop, asked a survey question about the location of a new store, and the answers helped them decide to add a 3rd location on the south end of the city.

Selling contests as a bundled package to just 8 advertisers brought in $24,000 in revenue in 2014 ($3,000 each from 8 advertisers), and they are already scheduled to bring in an additional $24,000 in 2015. Even better? Six of the 8 advertisers who participated in 2014 renewed for the following year, making it even easier for their reps.

Advertisers found it beneficial to be associated with something that their customers looked forward to and that was well received by the community. They were thrilled with the attention they received, especially as a title sponsor. Plus, they found that approximately 40% of registrants were willing to opt in to receive further information from a particular title sponsor. The email list each client receives after their turn as title sponsor gives them an opportunity to directly contact potential customers.

Finally, this program gave them a foundation to build upon. They layered in additional promotions throughout the year to expand on the monthly, reoccurring revenue generated from the sweepstakes bundle.