WRBR-FM is a DMA 89 radio station in Mishawaka, IN. We’re always looking for creative engagement campaign ideas to hook different advertisers in our community, and this time we were looking for a way to celebrate our station’s 21st birthday.

When we heard Hoosier Harley Davidson was looking for a creative way to engage their target audience, we knew a partnership would be a great idea. The advertiser wanted to collect data, email addresses, and drive foot traffic to their store, but were ultimately interested in identifying hot leads. With a new Harley Davidson motorcycle costing up to $40,000, just one lead developing into a sale could make a big impact on the their revenue.

Together we came up with the Birthday Bike Giveaway combining multiple ballots and a sweepstakes leading to one lucky grand prize winner of a brand new, custom built Harley.

While we knew a sweepstakes would have the ability to drive in tons of entries and grow the Hoosier Harley Davidson email database, we wanted to take their campaign to the next level and make it last all month long.

A valuable prize is crucial to driving in lots of entries. However to ensure all of those entrants are potential hot leads, we wanted to be sure the prize was valuable specifically to motorcycle enthusiasts. Hoosier Harley Davidson put up an incredibly valuable prize of a new $15,000 motorcycle – an outstanding prize for any motorcycle rider. 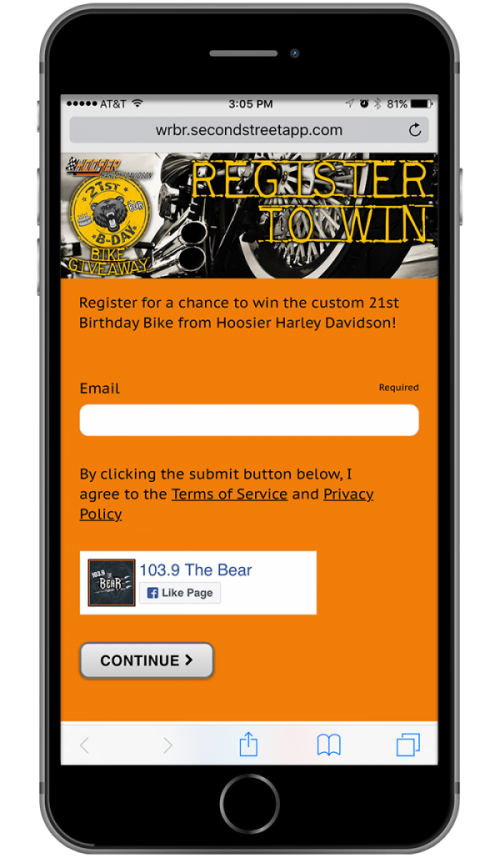 But we wanted to take this a step further. We proposed the idea of combining the sweepstakes with a multi-ballot campaign. Instead of giving out a motorcycle chosen by Hoosier Harley Davidson, we would let their audience build a custom motorcycle.

In each of the three ballots, users were given the chance to vote on a different aspect of the grand prize motorcycles. From paint jobs to handlebars, the ballots helped design a perfect bike their audience would love. Plus, Hoosier Harley Davidson was able to learn about the style preferences of their audience at the same time. 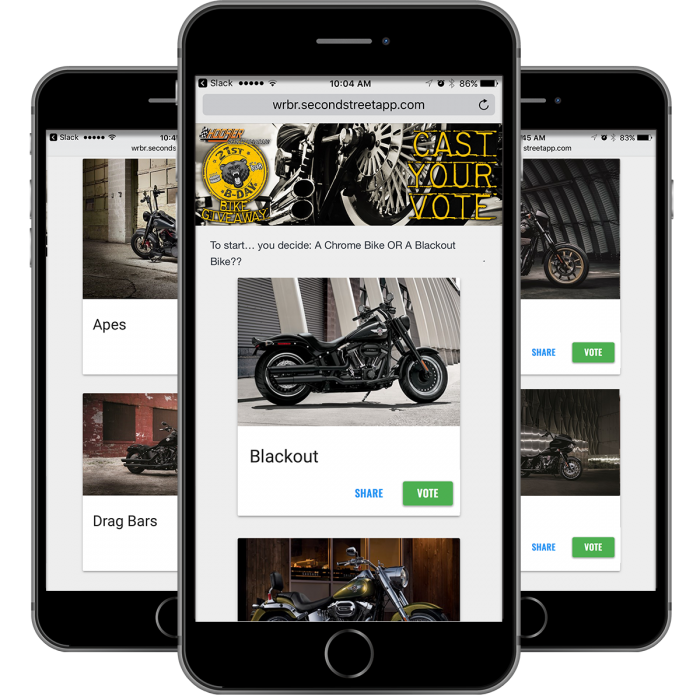 Email is the #1 driver of engagement, so to promote the sweepstakes, we sent a targeted email to all who voted in the ballots. Users had three ways to enter: They could register online, they could stop by an onsite event at Hoosier Harley Davidson, or they could call-in to our on-air broadcast during designated times. 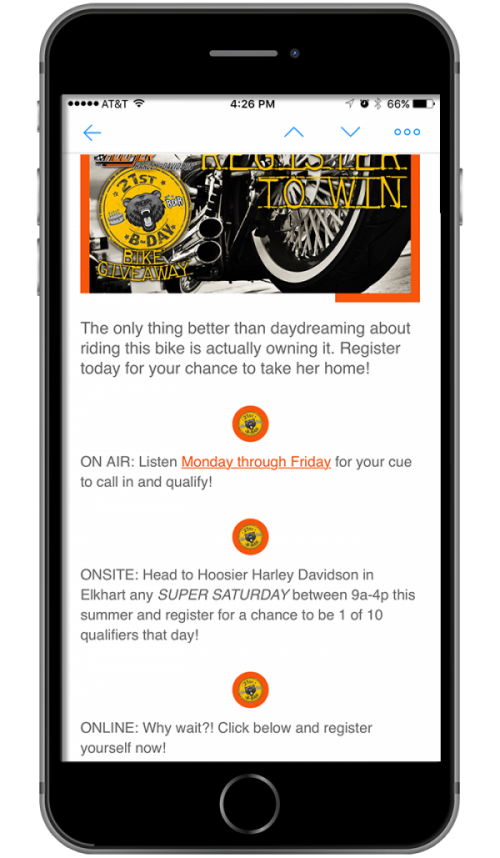 To get even more customer data, we added in two specific lead-generation questions for the advertiser asking if they currently owned a motorcycle or were interested in trading or purchasing a new bike in the future. 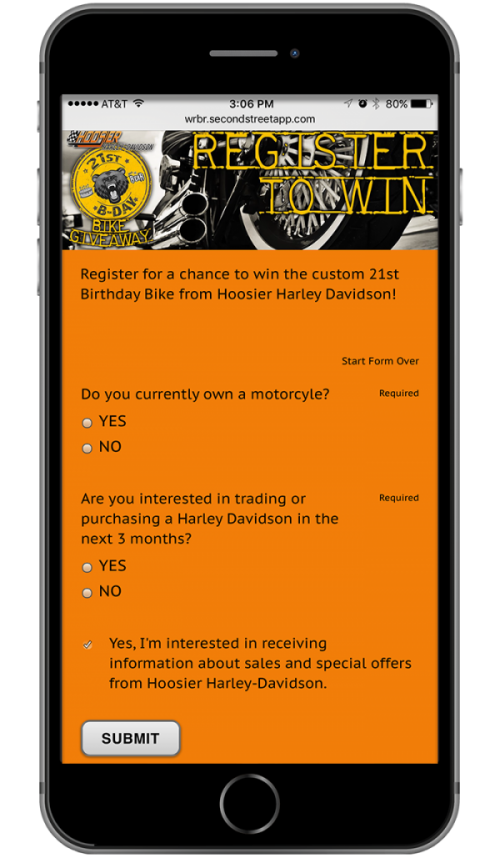 With a prize as good as this, it was important to make sure our target audience heard about the contest. We marketed it on our website, on our own social media pages, and on Hoosier Harley Davidson’s page, our strongest marketing tactic came from an email about the contest to our database.

Announcing the grand prize winner was a lot of fun for all involved. The unveiling was held at a live event at Hoosier Harley Davidson. After the event, we posted the winner on our social page and our audience loved it. Plus, by tagging the advertiser in the post, they got additional exposure too.

By the time the campaign ended, it was clear the 21st Birthday Bike Giveaway was a big success. We secured $1,500 in sponsorship revenue, the advertiser covered the cost of the $15,000 prize bike, and we grew our email database by more than 1,000 addresses.

For Hoosier Harley Davidson, our lead-gen questions on the sweepstakes uncovered over 330 hot leads. If just one of those turns into a sale, that’s thousands of dollars for the sponsor. The advertiser was also able to add over 850 new addresses to their email database which they can use for future targeted marketing campaigns based on the new data they just collected.