WLEX is a DMA 64 television station in Lexington, KY – right in the heart of University of Kentucky Wildcats country. Around here, the March basketball tournament is one of the biggest events of the year, and we wanted to capitalize on this.

While we had run a basketball bracket in the past, it had been more than five years, and we knew we had the opportunity to make this a big success. If we could find the right advertisers and have a strong promotional strategy, we had high hopes of scoring a ton of revenue and engagement.

We started planning out our campaign in January, and by early February we were reaching out to potential advertisers. To increase our revenue opportunities, we created multiple sponsorship levels at different sponsorship investments.

We also offered three Supporting Sponsorships for a $3,500 sponsorship investment to Central Kentucky Truck and Trailer, a local Edward Jones advisor, and the Corbin Arena (a concert venue). These three businesses also had their branding on all promotional materials and provided a prize valued at over $50.

Additionally, we offered one other sponsorship to Ale-8-One, a local soft drink distributor and longtime advertiser with WLEX. Ale-8-One put together two large prize baskets (each valued over $100) for the winners of the best 16-team bracket and the best 4-team bracket.

We knew the success of our bracket would rely heavily on participation. We had a strong marketing blitz including website ads, interstitials on our weather app, live mentions on Hey Kentucky!, and promo spots on WLEX.

Email is one of our biggest drivers of participation, so we leveraged an email campaign leading up to and during the bracket season. 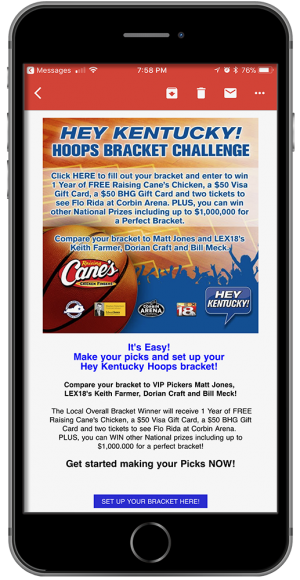 We also leveraged our core product. Since we were interested in driving fans to the Hey Kentucky! show, the bracket had a rotating spot on the show and a hosted segment to talk about the tournament. We also leveraged the VIP Pickers within the bracket itself. Our entire sports department and some other WLEX faces participated.

After listening to last year’s Second Street basketball webinar, the Journal Star shared an additional opportunity to increase our revenue through our Advertiser Bracket Challenge. We took their lead and created our own.

For every $500 in incremental spend with our station, advertisers could sponsor a team (or multiple teams) within the 64 team team bracket for the chance to win additional advertising with WLEX. Each round offered a new advertising benefit such as additional ad impressions, a mobile takeover ad, or tv promo spots. 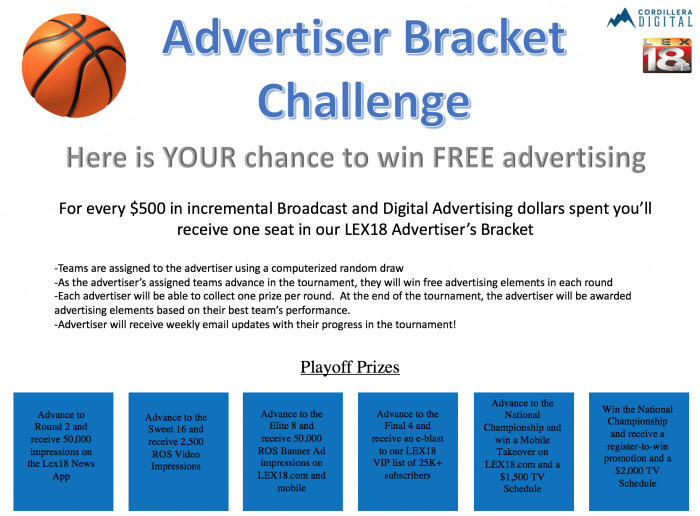 But it wasn’t all about revenue. We wanted to increase traffic to our new Hey Kentucky! website. Throughout the tournament, we saw a 51% increase in visitors to HeyKentucky.com as well as a 58% increase in pageviews.

Our advertisers were also pleased with the results. Our title sponsor received over 1,000 opt-ins to add to their database, and many of the advertisers are already talking about participating in next year’s basketball campaign.

The success of our first bracket has us inspired to do even bigger and better things next year. We’re already planning on incorporating additional pieces to our campaign such as quizzes or a photo contest, and we’ve also seen we can charge more for the sponsorships of our advertiser bracket as well. We can’t wait to see what the next year brings.

Kate is the Interactive Account Executive at WLEX-TV in Lexington, KY. She takes pride in supervising contests from conception to completion and delivering measurable results to advertisers.