Enter “The Nissan Kick Off Challenge” weekly sweepstakes. This promotion gave the individual Nissan dealerships the opportunity to be the face of the Sunday afternoon football game and analytical data for Nissan regional to use to schedule test drives and convert interested buyers into sales.

The key to a great sweepstakes starts with the prize. While we could have given away something generic, we wanted this contest to drive in qualified leads – people interested in the brand new Nissan Titan-XD (valued at over $57,000.) For such a valuable prize, it was important for us to bring in a contest insurance company to secure the reimbursement of prize to the dealership. 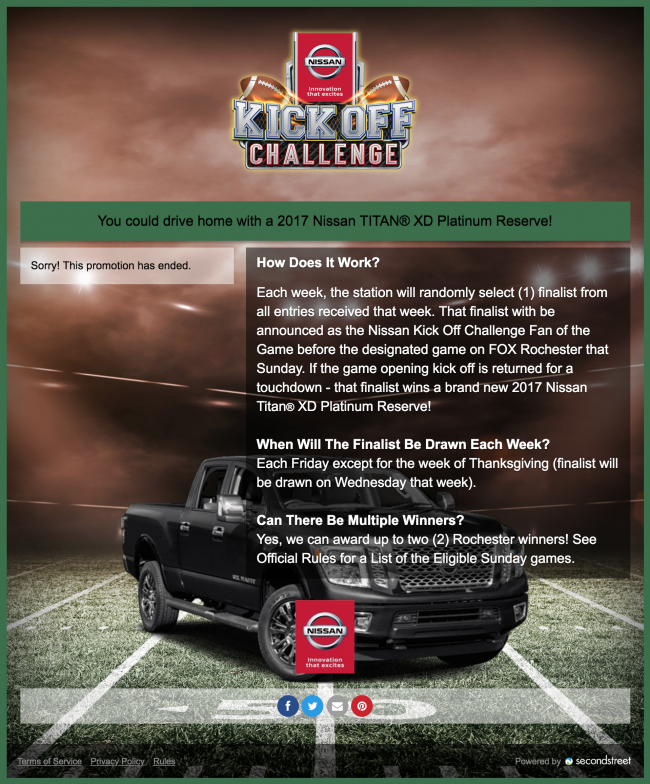 Next, we needed to determine how this contest would tie into the Sunday football games. We split up our sweepstakes into ten weekly rounds corresponding with the first Sunday afternoon football game on FOX Rochester. Each Friday a new Fan of the Game was selected from all of the entries collected that week. While users could register all-season long, only one finalist each week had the chance to win the Grand Prize. 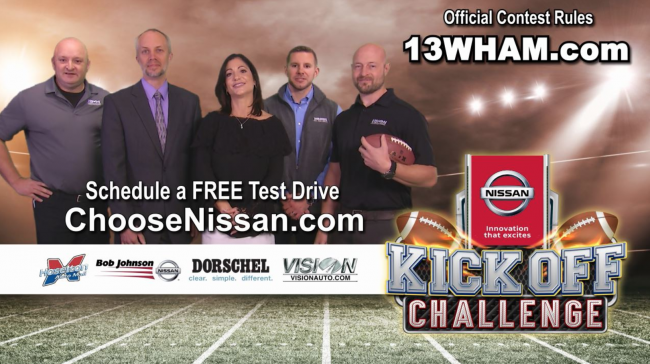 While Nissan would be getting a ton of branding from the contest, we also wanted it to drive a list of hot leads for their local sales teams. On the registration form, we added three survey questions pertaining to the user’s interest in Nissan cars. The last one asked if they wanted someone to reach out to schedule a test drive – an ideal lead for any sales person. 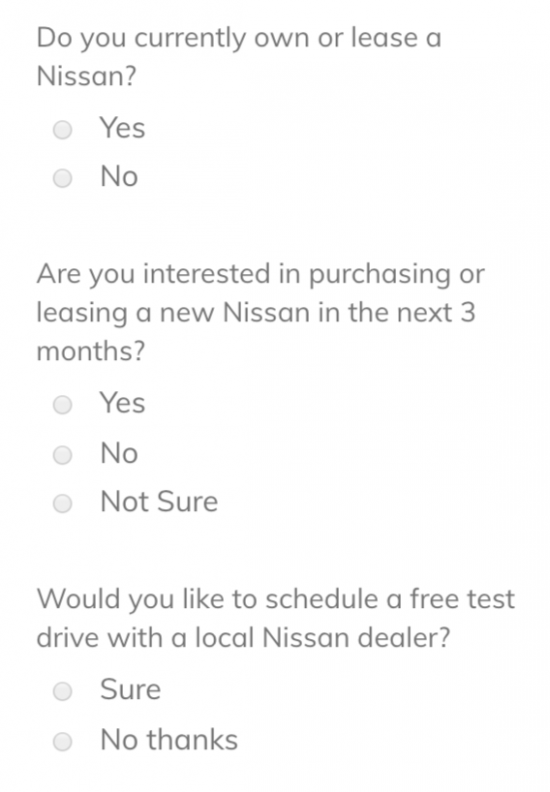 In addition to the survey questions, the registration form included an email opt-in and optional Facebook Like box for Nissan as well as ourselves. We understand the importance of leveraging every contest as a chance to expand our own database and want to help our advertisers do the same.

The final – and perhaps most important piece – of the contest was driving in participation. Email is always our top driver of participation, so with a season-long promotion, we were sure to have a strong email campaign.

We sent out an invite email to kick off the contest and then sent out follow-up emails throughout the season announcing our Fan of the Game, reminding people to register, and getting them to tune-in to the Sunday game. More than half of the contest participants indicated that they heard about the contest through e-mail and another quarter discovered it through social media. 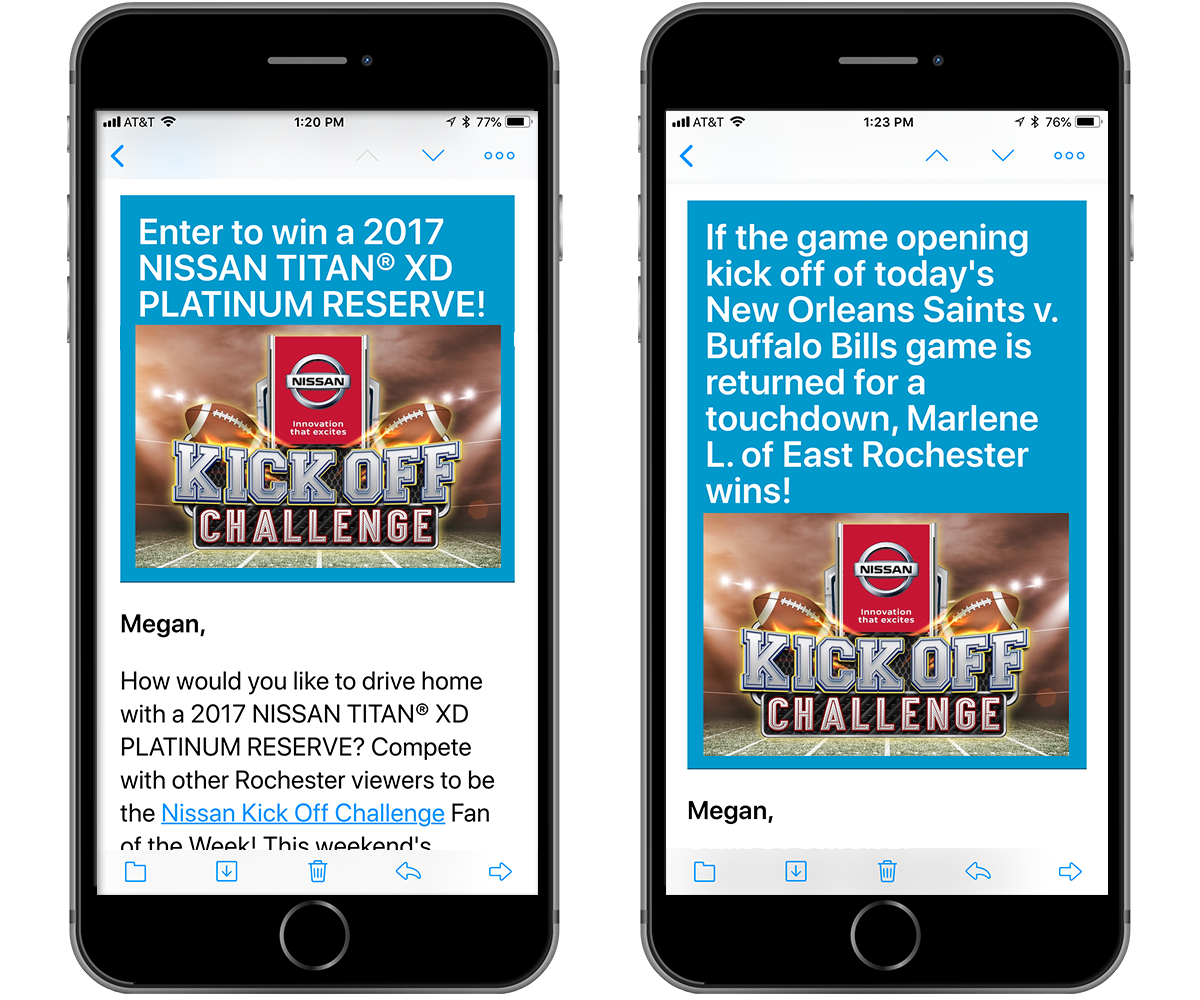 Beyond email, we leveraged a ton of other avenues for promoting the contest. We had an on-air spot ad, tons of website ads, and promoted it across our WHAM-TV Facebook Page and tagged our sponsor in the posts. Our local Nissan dealership owners were featured in all of the on-air spots, website ads and were the face of the promotion. They loved that they could be involved in such a large promotion.

Even though seven games in the NFL season in 2017 had kickoff return touchdowns, unfortunately none were completed in the designated games of the Nissan Kick Off Challenge. Although there were no winners, this was still a “touchdown” for Nissan. 30 people requested to schedule a test drive, more than 50 people said they were interested in purchasing or leasing a Nissan in the next three months, and the dealers added more than 680 people to their email database. This was great brand exposure for Nissan since 87% of contest participants indicated that they currently did not own or lease a Nissan.

And for us, the sweepstakes added over 1,100 new email addresses and brought in $25,000 in digital revenue as part of an overall $75,000 Q4 package with WHAM-TV. But what’s even better was hearing the Nissan dealers expressed it was the measurable results of the digital sweepstakes that sold them on making their investment.