Advertiser capitalizes on leads, signs on to $22K promotions commitment for following year

WHAM-TV is a television station operated by Sinclair Broadcast Group in Rochester, New York. We needed a compelling idea in order to secure a lasting partnership with a local car dealership, who wanted to generate qualified leads and to see an increase in their ROI. We wanted to engage our viewers, to increase ratings during the summer, and to generate revenue.

The concept: a seven-month promotional campaign with a codeword sweepstakes kick-off. The promotion was still in development before attending the Second Street Summit in June. At the Summit, however, we were inspired by the concept that “we should get as much as we give,” and we couldn’t wait to put all of these tools into action.

In the promotion, viewers had the chance to win a two-year lease on a Chevy Cruze by entering daily keywords each weekday on a registration page. In addition to brand exposure, this would allow the dealership to build their email database and to generate qualified leads.

Because a codeword sweepstakes has a higher barrier to entry, it’s best practice to deliver a valuable and exciting prize that people will want. We set the sweepstakes up for success by securing a two-year lease on a Chevy Cruze (a total of $4,276 value) as the prize.

To engage the audience, our team released a daily codeword that entrants could enter a maximum of 28 times, for a total of 28 chances to win the Chevy Cruze prize. Entrants could easily enter the codeword through a direct link or through the promotion on our Facebook Page. The average entrant submitted two keywords each! 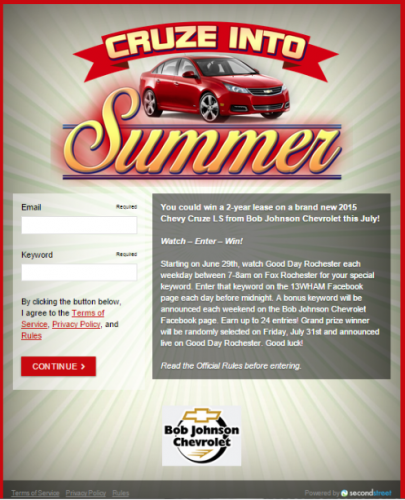 Our team maximized viewership and engagement by releasing the codewords through a variety of avenues:

We added a survey question on the second page of the entry form, which read: “Are you planning to buy a new or used car in the next six months?” The dealership could then leverage this information in order to reach out to consumers on the brink of buying. 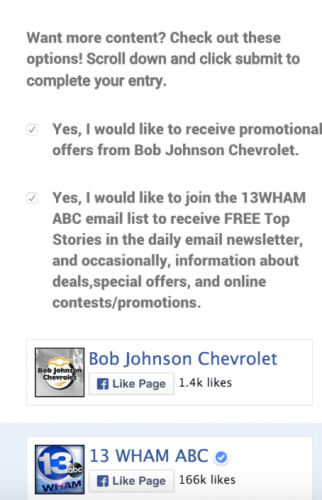 We kept our momentum going throughout the promotion, epitomized by the grand finale, a live announcement of the prize winner on Good Day Rochester. This airtime provided the car dealership with great exposure. (Plus, it was a blast to watch!) 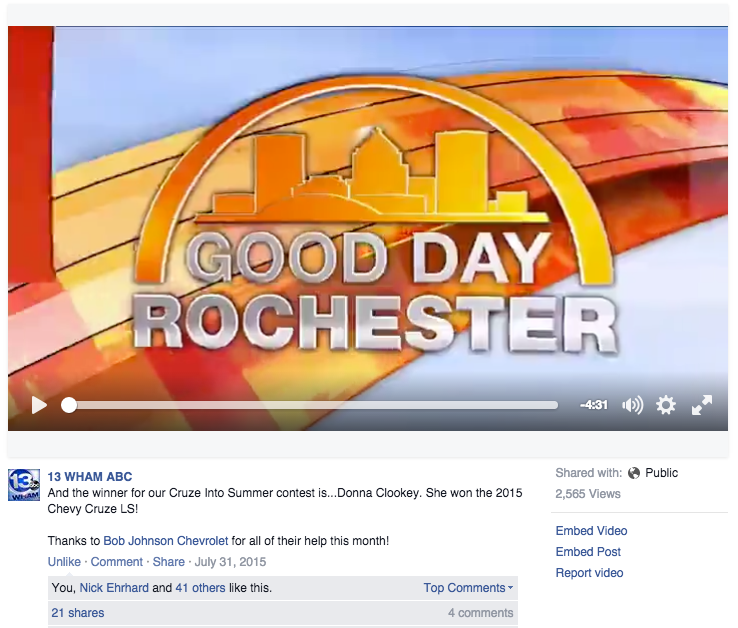 The codeword sweepstakes, which we sold for $2,000, kicked off a 7 month promotional package that generated $1,500 a month. This brought in a total of $12,500 over the 7 month deal… all through promotions!

The sweepstakes also provided incredible value to the dealership due to the amount of leads and data it generated.

The entry form’s email opt-in added 372 emails to the dealership’s database for future marketing, contesting, and targeted messaging. Plus, the targeted survey question indicated that 111 participants (30% of the total participants) were in the market to buy a new or used car in the next six months. The dealership flagged 72 hot leads – people in the market for a car who also wanted to receive promotional offers from the sponsor.

72 hot leads for a car dealership is a big deal – if just one lead generated from the promotion led to a car purchase from the dealership, the promotion would be paid for. In fact, the dealership was so happy with their lead data that they signed on to run one promotion per month with us for an entire year and to launch two more car lease giveaways (“Malibu Madness” in February and another “Cruze into Summer” in July). This totaled to a $22,000 promotions commitment for the next year!

So why were we so successful? Planning and delivery. We did our homework, which allowed us to deliver measurable results to the sponsor and to pocket $12,500 and the promise of a future partnership. 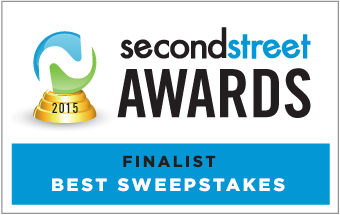 WHAM-TV’s Cruze Into Summer was a finalist for the Best Sweepstakes at the 2015 Second Street Awards.