Steamboat Digital is the digital marketing agency that operates under the Steamboat Pilot, a daily newspaper in Northwest Colorado. Steamboat Digital primarily focuses on destination and recreation marketing for both a local and regional client base. At the last minute, we were approached by an event organizer of the Steamboat Movement Festival, a 4-day yoga retreat in the mountains. This was the first time they put on the event, and they were struggling to get the word out and generate buzz within driving distance of the festival.

We knew that a sweepstakes would work best to reach the advertiser’s goals discovered during our our customer needs analysis meeting. We laid out clear goals for our sweepstakes:

The sweepstakes ran for two weeks on the Steamboat Movement Festival website with the grand prize offering a VIP Pass to the festival – including a 4-day, full-access, all-inclusive ticket valued at $750.

Cross-promotional marketing ran in the form of newsprint advertising, was featured on Facebook boosted posts, an email was broadcast to our tagged database of Fitness & Health users, and ads were run on local radio. We wanted big success, so we were sure to follow all the recommended best practices. 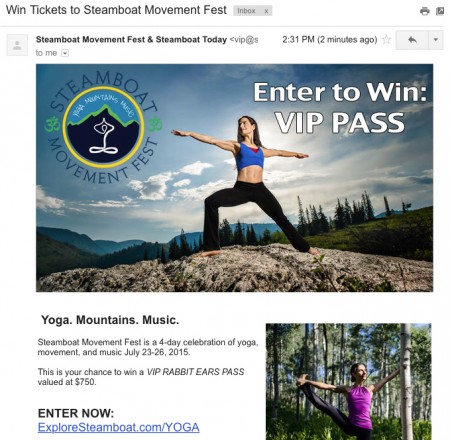 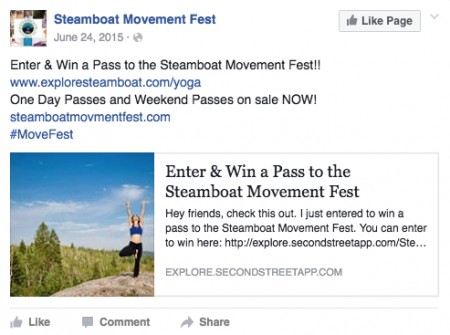 Users were directed to SteamboatMovementFest.com to register to win a “VIP Pass” to the event. Since the prize included event participation, entries came primarily from those who fit the target demographic of the event.

Upon sweepstakes entry, users were sent a follow-up email that contained a promo code to save them money on paid registration. Special care was taken to remind entrants that they would be reimbursed for event registration in the event that they were selected as the winner. This was important because the goal was to drive paid early registration, and we wanted to avoid delayed registration based on the chance that they might win.

On the thank-you page, those that registered to win were given the opportunity to share the contest on social media and email to earn additional chances to win. This increased the reach of the promotion dramatically and drew a much wider audience than anticipated. 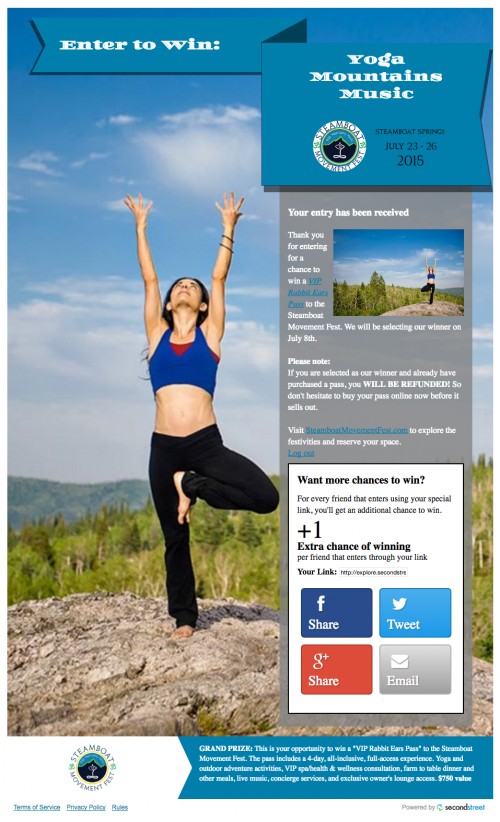 After the winner was selected and announced, all entrants were sent a follow up email with a direct call-to-action to register for the event. Since this was a very targeted email blast, it proved to be extremely effective at driving paid registrations.

Over the span of two weeks, this sweepstakes resulted in 649 entries of which 52% were age 43 or older and 78% were female. This aligned with the core age and gender demographics that the event organizers were hoping to reach.

102 paid registrations were earned as a direct result of the discount promo code and call-to-action used in the follow up email to users. With an average event fee of $230, this resulted in $23,460 revenue for the event. Steamboat Digital charged $1,500 for the promotion, which meant a nearly 15x ROI for the event organizers.

After the event, we met with the organizers who couldn’t be more ecstatic about the results. For the upcoming year, the Steamboat Movement Festival has even stepped up their investment with our agency to over $5,800. We plan to expand on this promotion dramatically, and now we’re starting with a highly targeted list of 649 people the event organizers didn’t have the year before.

David is the Digital Sales Manager for Steamboat Digital, the full-service digital marketing agency operating under the umbrella of Steamboat Today. Steamboat Digital primarily focuses on destination and recreation marketing for both a local and regional client base.