Our sales director, Jolene Sherman, and sales rep, Michael Slawin, were looking for a new business sale with Mizzou Athletics. Mizzou, a college located in Columbia, MO, is just a couple short hours away from our target demographic in St. Louis.

Mizzou Athletics had worked with us in the past, but we knew we needed a new, unique idea to rejuvenate our partnership. The advertiser was looking for an opportunity to grow their fan base and sell tickets. We knew the timing couldn’t be better: Following the departure of St. Louis’ pro football team a few months prior, local fans were left without a home team.

In addition to their ad buy, we pitched the idea of the “Mizzou FANtastic Fan Photo Contest.” While we knew that our contest had the potential to be a huge hit with Mizzou’s target fan base, we hoped it would also drive revenue, collect email addresses for our new Mizzou sports newsletter, and increase reader interaction and page views for the St. Louis Post-Dispatch.

Mizzou Athletics loved the idea of the photo contest and couldn’t wait to see the results.

“I can assure you, the photo contest was 100% the reason they partnered with us!”

This photo contest had a lot of factors to lead to its success.

While the photo contest was a major part of our deal, we paired the promotion with a special section to run in the Sunday paper the week before the school’s first football game. The Mizzou Tigers Special Section included: 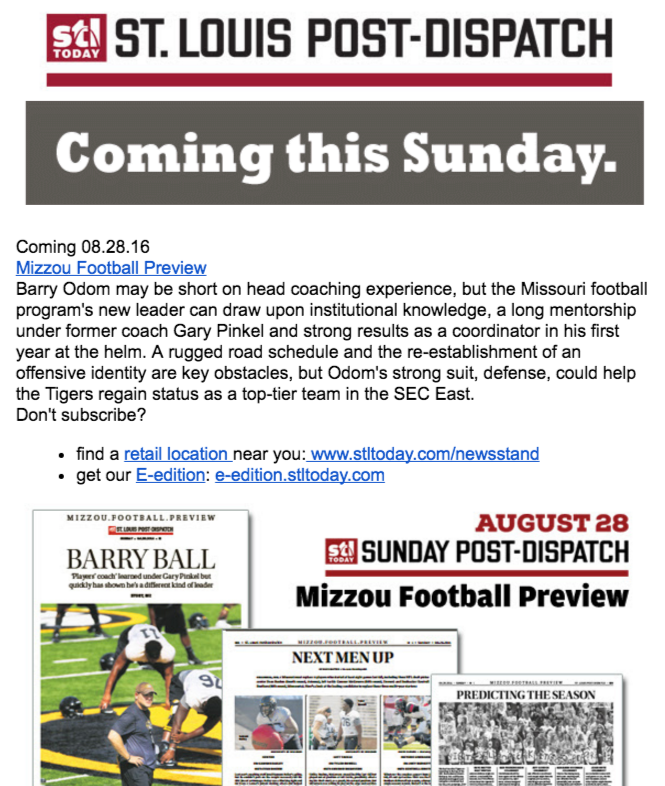 We also wanted to optimize the fan photo contest to provide as much value as possible to Mizzou. As part of the photo contest sponsorship, we included the following:

We wanted to ensure lots of entries on our photo contest and knew picking a valuable prize was the place to start. Mizzou Athletics provided a fantastic grand prize that would definitely draw in Mizzou fans:

Photo contests can thrive on social media. We promoted directly to all of our St. Louis Post-Dispatch social media pages. 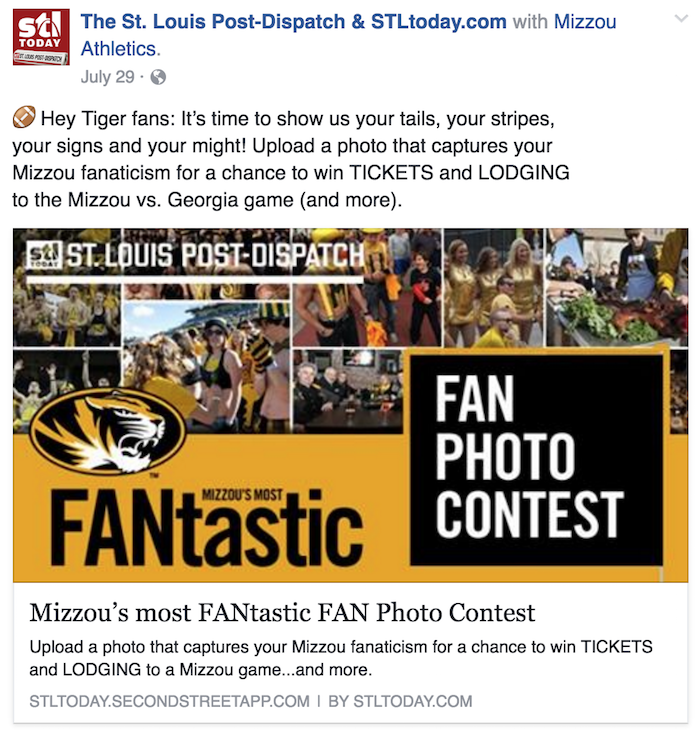 While our own posts received a lot of engagement, it was great to see the community sharing the contest to their own Facebook Pages. Entrants were often posting to request votes and the Mizzou Alumni Association even posted to their Facebook Page as well.

At the conclusion of the contest, we did a full-page spread publishing the winner and the two runners-up.

The contest was a resounding success. After a two-week submission period and one-week voting period, we collected 146 photo entries and brought in more than 1,300 votes.

This campaign – which included the photo contest and ad space from additional advertisers in the special section – lead to $18,000 in revenue for the St. Louis Post-Dispatch. We can’t wait to run our next photo contest.

Elaine Vydra is Digital Marketing Manager at the St. Louis Post-Dispatch. She is dedicated to the crucial importance of promoting print journalism -- both in traditional and digital form -- and finds the Second Street platform to be an invaluable and unique tool in her never-ending quest to expand audience reach.