A staple in Springfield, Missouri since 1951, Mexican Villa restaurant decided it was due time to remodel their original location. After more than 64 years and six additional restaurant locations, they wanted to give the restaurant and brand a makeover.

While the original Mexican Villa location was remodeled earlier in the year, the owner felt there should be a re-grand opening celebration to commemorate the drastic changes they underwent. The idea was to create an entertaining trivia quiz that would also educate consumers on the history and heritage of the landmark Springfield restaurant. To develop the quiz, we looked into adding vintage photos, old menu details, and other Mexican Villa memorabilia to the questions themselves. We worked closely with the restaurant to ensure that the quiz not only tested people’s niche trivia, but also gave them a chance to tell the Mexican Villa story.

The quiz had nine multiple choice questions that were designed to be fun and interesting, but also challenging enough to keep the users engaged. While most of the questions centered around the history and heritage of the restaurant, we decided to include a couple questions that required a customer to go to one of the Mexican Villa restaurants in order to answer correctly. 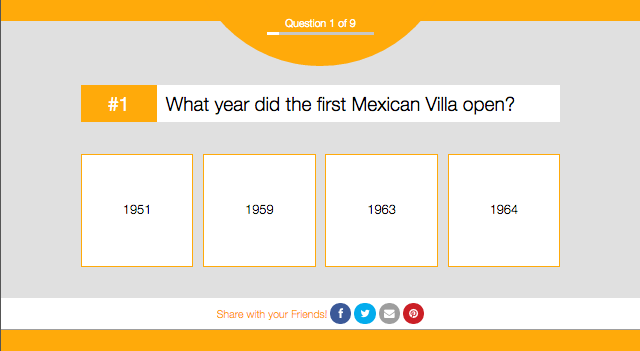 We wanted to offer a valuable reward that encouraged people to take the quiz, so we offered a $100 gift card to the Mexican Villa restaurant. The gift card would be given to a random entrant who completed the quiz during the specified time frame. Because we had included such a high value reward, we felt comfortable adding two required lead-generation questions on the registration page. The first question asked how long they had been a customer at the restaurant, and the second asked where the consumer would like the next Mexican Villa to be located. 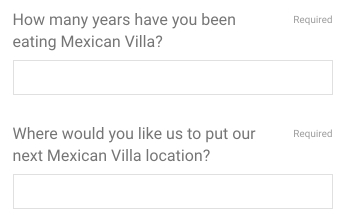 The consumer responses to these questions were very important and could then be used to leverage future engagement campaign strategies. In fact, after filling out the lead-gen questions, we saw that many consumers requested a new Mexican Villa in a specific zip code which already had one, just under a different name. Upon learning this, the restaurant owner was able to create advertising to make this restaurant more well known and was also able to directly email those quiz entrants and let them know about the restaurant.

This quiz was featured heavily on our website via banner ads, as well as on the KY3-TV Facebook Page. We also promoted the quiz through our other various social media sites.

The results for this quiz were outstanding. We made $1,500 digital revenue, and of our 1,739 entrants, 70% opted in. The posts on the KY3 Facebook Page were also well received and earned quite a bit of activity and engagement. Despite all of this, the biggest benefit we learned from this campaign was the overwhelming success of this type of promotion or interactive content and its possible use in the future with Mexican Villa. The quiz gave us an opportunity to discuss other digital services and to talk about future possibilities – they are already planning to run another engagement campaign with us during this upcoming holiday season.

The owner of the restaurant was thrilled with the results of this quiz. Here are just a few pieces of feedback we received from him:

Kent is the New Media Development Manager at KY3-TV in Springfield, MO, part of Schurz Communications. He manages the station’s digital revenue initiatives, including running a very successful engagement campaign strategy to help grow their audience and deliver results that matter to their local clients.