From Scared of Santa to Holiday Spirit, we’ve put together a list (and checked it twice) of photo contests that you could run this holiday season

The holiday season gives way too many photograph opportunities. Whether it’s an adorable baby, a cute pet, some fantastic holiday lights, or a family showing off their Christmas spirit, you can find a photo contest that would be a perfect fit for your company. Plus, with this being the biggest spending season of the year, there are a ton of advertisers looking for these opportunities to get in front of their target audience.

Check out our list of photo contests you could run this holiday season:

TV station, KFMB has had a lot of success with their Scared of Santa photo contest. Their sponsor was City Lights Collectibles, a holiday specialty store. The brought in nearly 200 entries and drove over 4,800 votes. Plus, they were able to generate $3,500 in revenue from the sponsorship. 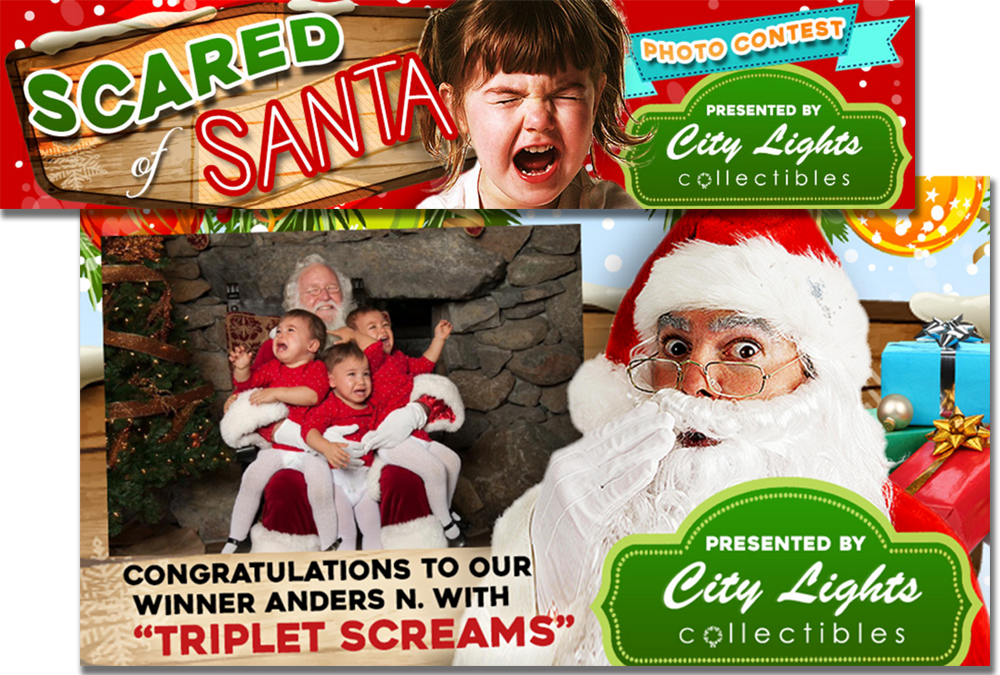 Capitalizing on the new family tradition of “Elf on the Shelf,” the St. Louis Post-Dispatch created a photo contest requesting creative pictures of these cute characters. Sponsored by Elf: The Broadway Musical, playing at a local theater, this contest gave the winner tickets to the show and a $50 cash prize. Nearly 300 people entered their elf photo for a chance to win. 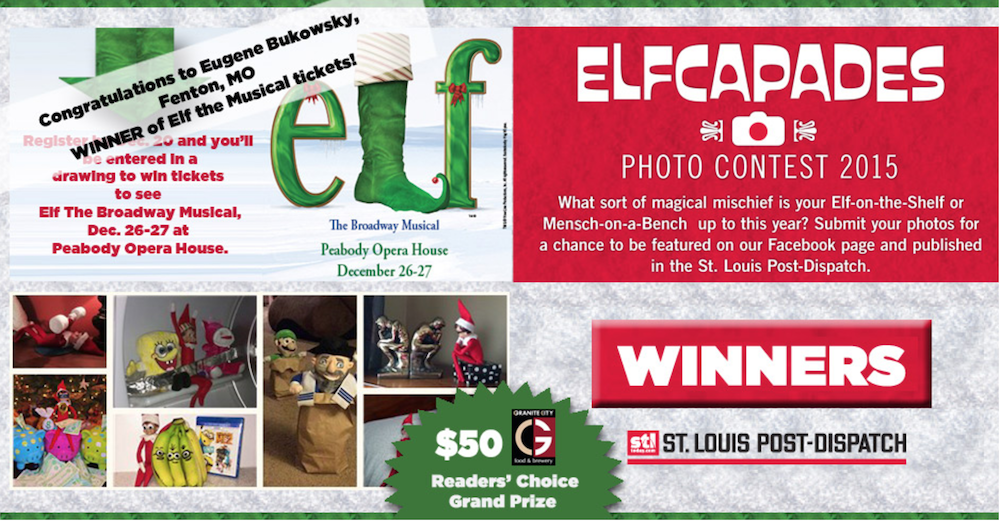 This Ugliest Christmas Sweater Contest invited users to submit photos of them or their pet in their ugliest Christmas sweater for a chance to win a $250 Visa gift card. To encourage participation, the Free Lance-Star also secured Papa Johns to sponsor $10-off coupon codes for 25 lucky random users and allowed users to vote once per hour. The campaign collected more than 55 entries and 1,445 votes. 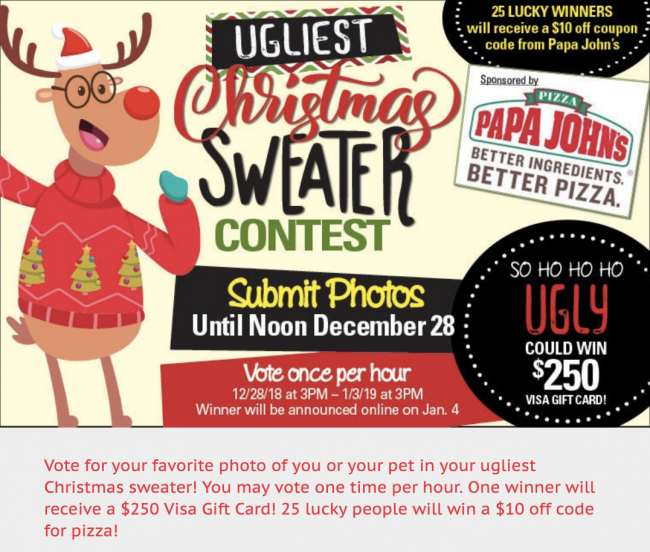 This holiday lights contest run by York News-Times was co-sponsored by four local businesses, a computer repair shop, a quilting supply store, a construction company, and a bank. The contest received nearly 60 entries and over 2,000 votes were cast to pick the winner.

People are passionate about their pets. This holiday pet contest by WXSS-FM was sponsored by Fromm Pet Food and the winner would receive a year’s supply of food from the store. The contest received 134 entries and 146,000 votes. Plus, WXSS drove $4,000 in sponsorship revenue.

Everyone loves sharing their family’s classic holiday photos. The Roanoke Times created their photo contest seeking out “throwback” photos from the readers. Multiple winners would be picked to receive a photo print and $100 gift card to local businesses. 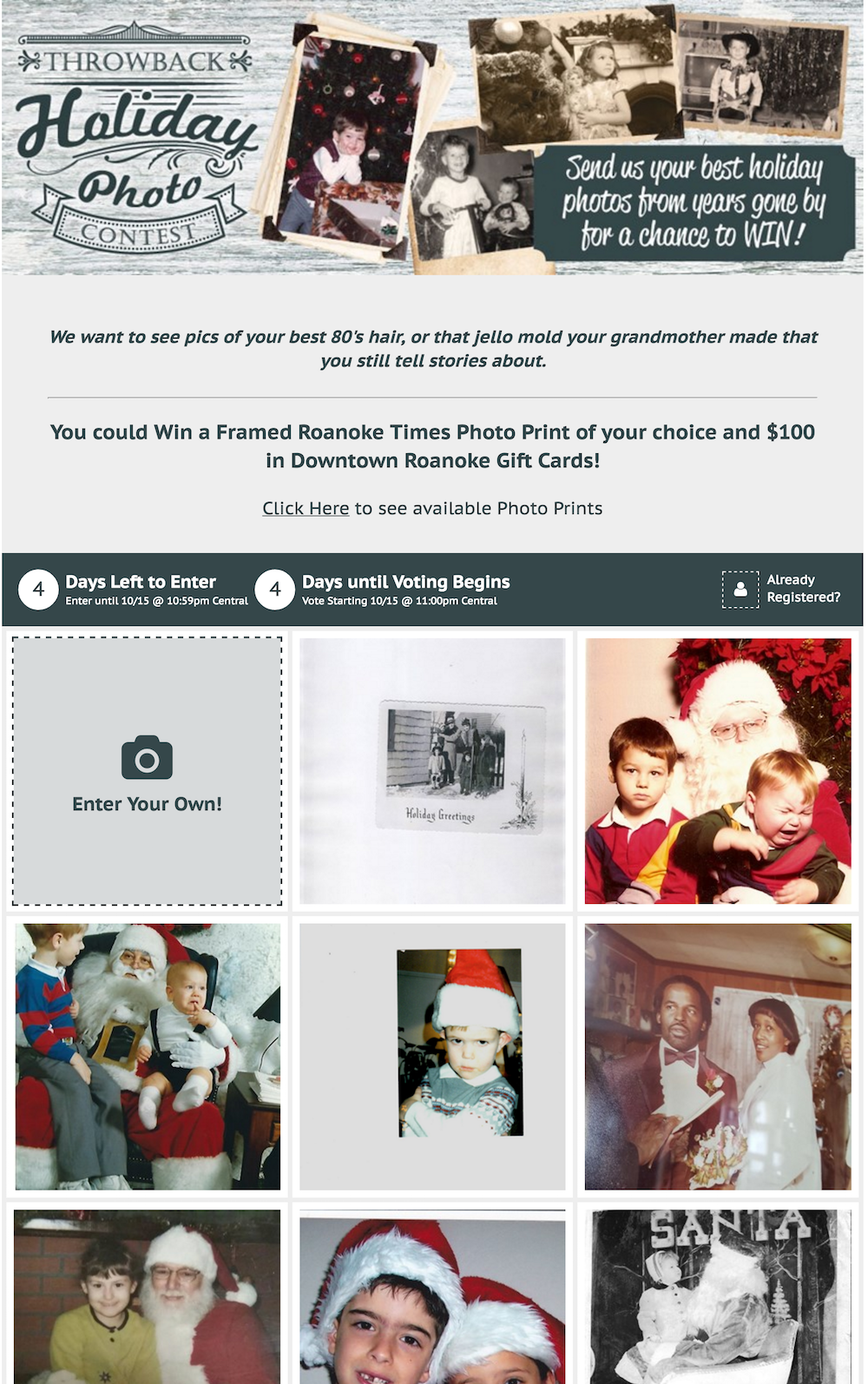 This feel-good contest had seven sponsors including a law firm, a garage door company, a local church, a jeweler, a holiday seasonal shop, an urgent care facility, and a trailer company. The contest sought out nominees of local families who could use a helping hand this holiday season. The contest would award prizes to four nominees and the grand prize winner would receive over $1,000 in cash and prizes to make their holiday complete. 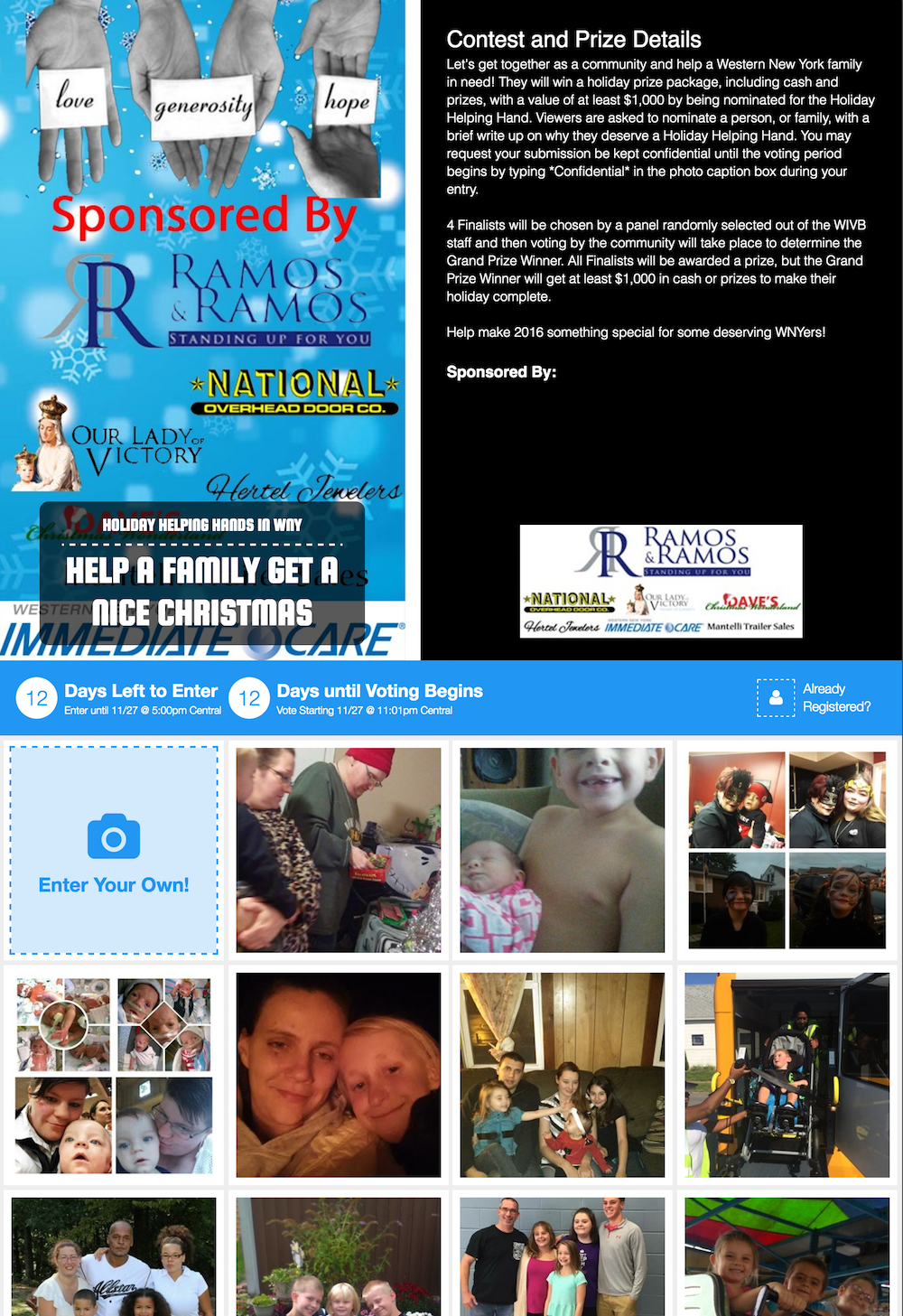 Show Us Your Holiday Spirit

Sponsored by a local theatrical production of “A Christmas Carol,” this holiday spirit photo contest is sure to be a hit with your community. To encourage more votes, WHAM-TV is awarding a pair of tickets to a random voter as well as a pair of tickets to the photo that received the most votes. Not only did WHAM include an email opt-in and optional Facebook Like Box for the theater, but they also included survey questions for the theater’s future marketing campaigns. 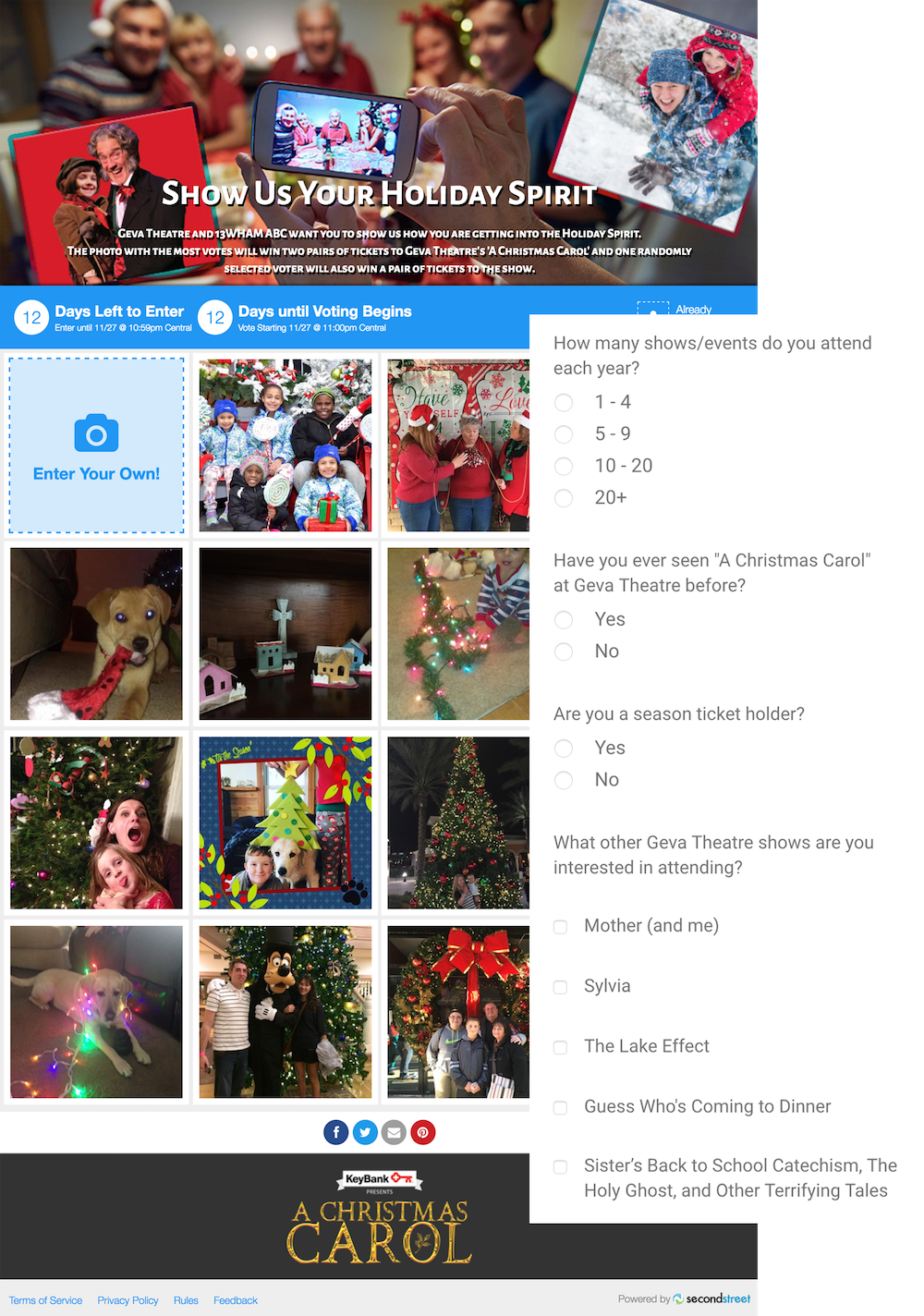 To celebrate families and their holiday, the Canton Repository and hosted this photo contest. Readers were invited to submit their family tradition photos for a chance to be featured in a special section over the holidays. United Way of Stark County sponsored the campaign, which brought in $20,000 in revenue for the paper. 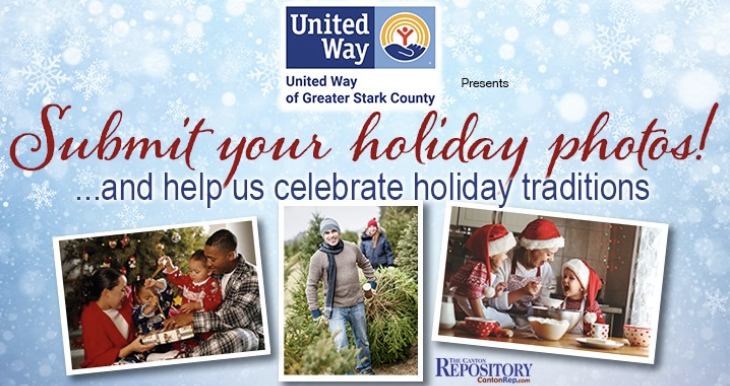 The holiday season lends itself to numerous ideas for photo contests. Not to mention, there are lots of advertisers looking to get in front of your audience during this big spending time of year. Make sure you’re ready to leverage a photo contest to boost your revenue and engagement during the holidays.