Make the most of football season by running ballot promotions

This season, supplement your pro, college, and high school football coverage with ballots. Ballots have typically been run as metro-wide Voter’s Choice – such as Reader’s Choice, Listener’s Choice, and Viewer’s Choice – where your entire audience votes on their favorite businesses in the community. In this case, football ballots present a unique opportunity to engage your audience around their favorite sport of the season.

Below, you’ll find a selection of sample ballots that you could run before, during, and after this football season.

Player of the Week 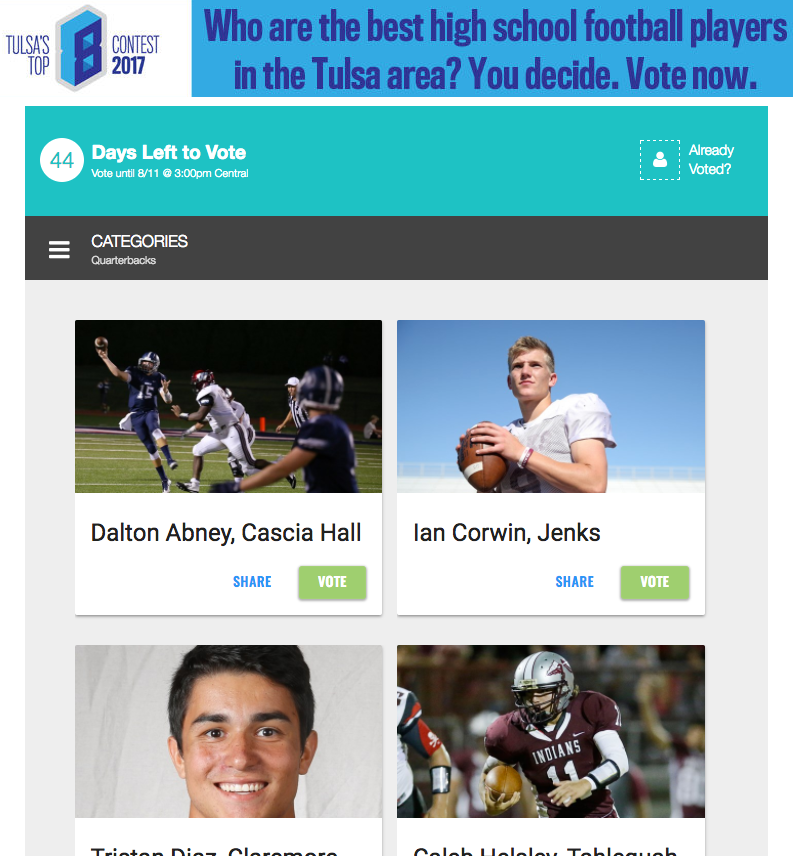 A Player of the Week ballot allows your audience to determine weekly MVPs for a variety of football positions. It’s also a great way to make a ballot campaign last all season long.

Player of the Week ballots work particularly well for high school football. This is because your audience will be even more invested in the voting process if they know the athletes personally. In addition, these ballots work for pro or college teams. If you already have an Athlete of the Week special feature in print or on air, this ballot type would be a great way to complement and expand your existing initiative.

Categories to Include for a High School Player of the Week Ballot:

Categories to Include for a College or Pro Football Player of the Week Ballot:

When to Run: Your Player of the Week ballot should run the entire length of the football season. If the team(s) you focus on make it to the playoffs, you have the option to extend your ballot promotion even further!

An All-Star ballot is very similar to the Player of the Week ballot described above. In fact, the two can easily be combined. Run a Player of the Week ballot throughout the season and then cap off the promotion with an All-Star ballot to determine the top players of the year. The advantage? More revenue for you and more exposure for your sponsors.

Groups and Categories to Include: Use the same categories listed above.

When to Run: At the end of the season, wrap up your season-long Player of the Week with a 2-week All-Star ballot.

Sportsmanship awards are the perfect opportunity to strengthen community bonds and shed light on those who elevate the integrity of the sport. Communities love giving attention to those who love the game, and this is a strong-hearted ballot that any advertiser would love to be a part of.

Categories to Include In Your Ballot:

This ballot covers every aspect of being a dedicated football fan, including where to go to watch the games and favorite memories from past seasons. For this type of ballot, be sure to give local advertisers included on the ballot the opportunity to purchase a category sponsorship or upgraded listing!

Groups and Categories to Include in a High School Football Fan Ballot:

Groups and Categories to Include in a College Football Fan Ballot:

Groups and Categories to Include in a Pro Football Fan Ballot:

When to Run: This ballot could run either prior to the start of the season to get people excited about football in preparation for upcoming promotions, or during the season to encourage additional engagement.

To learn more about how to sell these promotions, check out this ultimate guide to planning your promotions for football season and this list of advertisers to target for football promotions.

There are a wealth of opportunities for football promotions, and the way to make sure you’re making the most of the season is to run multiple promotions throughout.