The News Tribune sold a survey, infographic, submission contests, quizzes, & sweepstakes to a group of advertisers and drove season-long engagement for fans

The News Tribune is a daily paper based out of Tacoma, WA. After seeing the huge success we had from our multi-promotion football campaign that brought in $126,000, we knew we’d found something special with this strategy of bundling multiple promotions and interactive content together.

We have a big baseball fan base here with the Seattle Mariners and thought this could prove to be another successful campaign. We had three goals:

Once we’d laid out our game plan, we got to work figuring out every promotion and interactive content to run in our seven-month campaign.

We decided on a six-part bundle including:

One thing that takes our baseball campaign a step above our football initiative is our landing page. 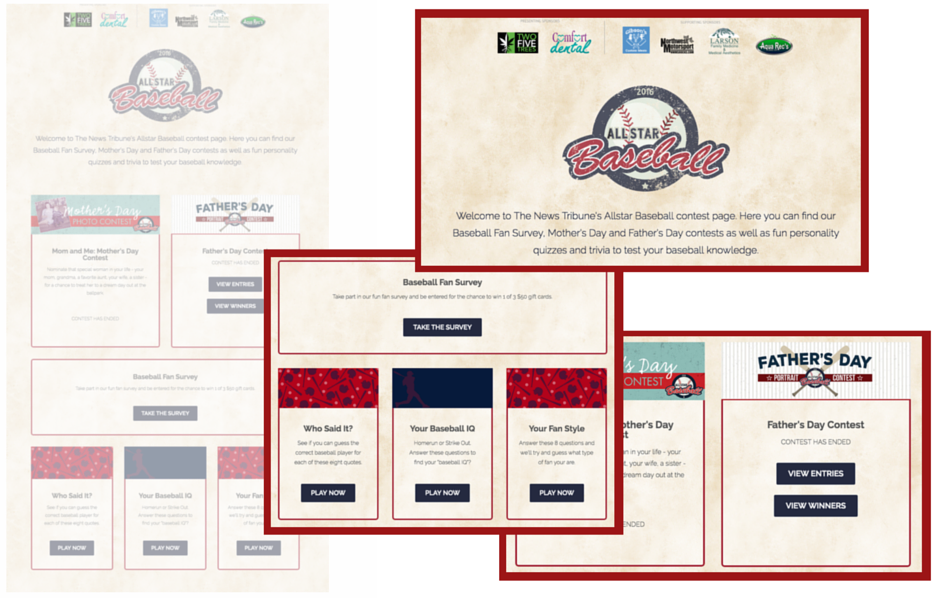 This page functioned as a hub where users could find all content related to the baseball campaign. With direct links to all the interactive content and promotions, it made it easy to navigate to all parts of the baseball initiative.

Sponsorship for our campaign was split into two tiers: 2 co-presenting sponsorships and multiple supporting sponsorships. Offering the two levels allowed for a bigger variety of advertisers to participate at a price that they could afford. 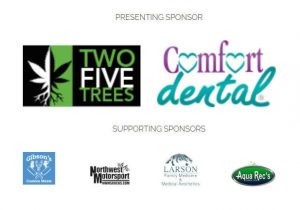 While our presenting sponsors paid to have their branding featured prominently on every aspect of the campaign, our supporting sponsorship packages were a bit more flexible – allowing sponsors to participate in the entire campaign or to sponsor specific aspects.

Each advertiser was provided with tons of branding opportunities:

We were specific about to include in our baseball campaign and carefully evaluated each part. We decided on a six-part bundle including:

We kicked off the season with our fan survey. It asks about twenty fun questions related to baseball – from what you like most about the sport to whether or not you have a lucky article of clothing.

To encourage participation, we offered a prize of a $50 gift card to three lucky entrants. Plus, since we’re collecting email registration, we could email participants to announce new aspects of our baseball campaign. 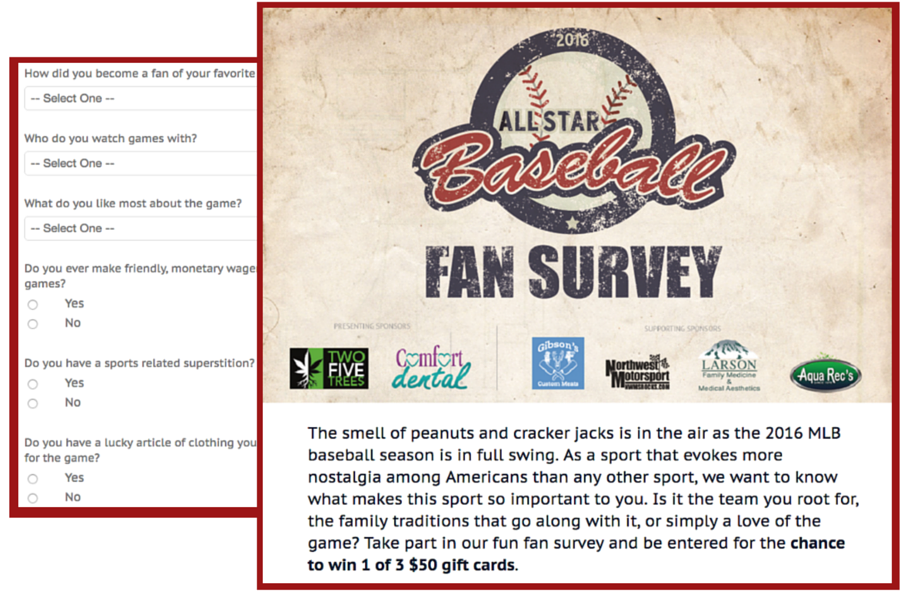 We announced the survey in many places including email and on website siderail ads. 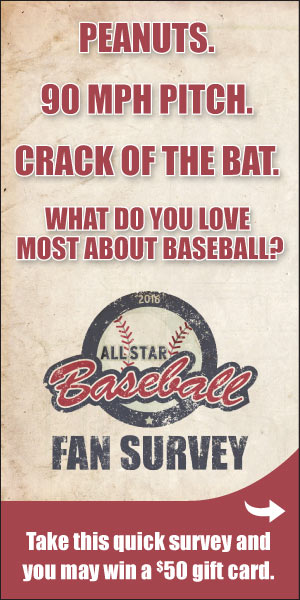 Our fan infographic for football received a lot of traction, so we’re doing the same thing for baseball. The infographic will be based on the results of the survey, and we plan to release it in August or September.

This is a great additional opportunity for branding to offer to our sponsors. The infographic gets shared all over social, making it a fun and exciting way to get their name out towards the end of the season. 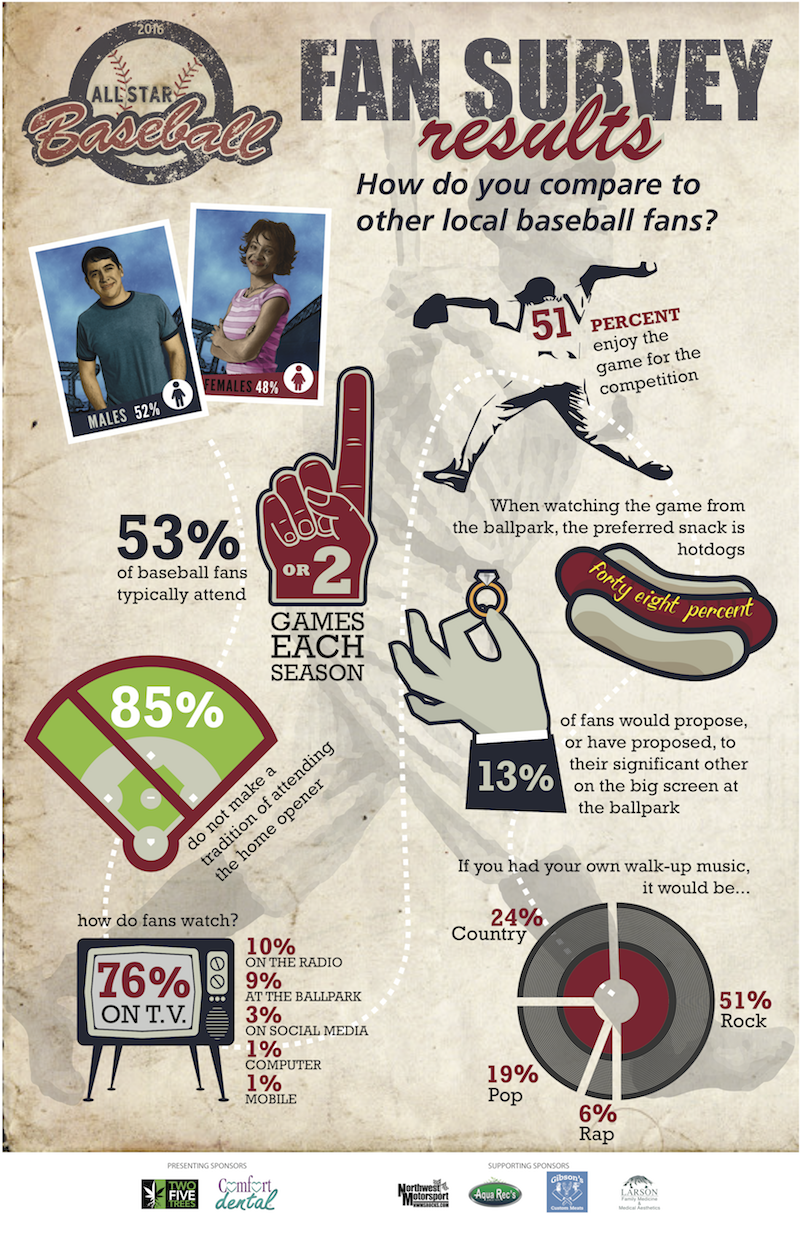 We thought it would be a great idea to capitalize on the holidays that fall during the baseball season. And when it comes to Mother’s Day – nothing’s better than a photo contest.

Users could nominate their mom by posting a picture and caption explaining what makes their mom special. Winners received a dream day to the ballpark including four tickets to a Seattle Mariners game, a $200 gift card to the team shop, a $200 gift card to a local restaurant, and transportation to and from the stadium. 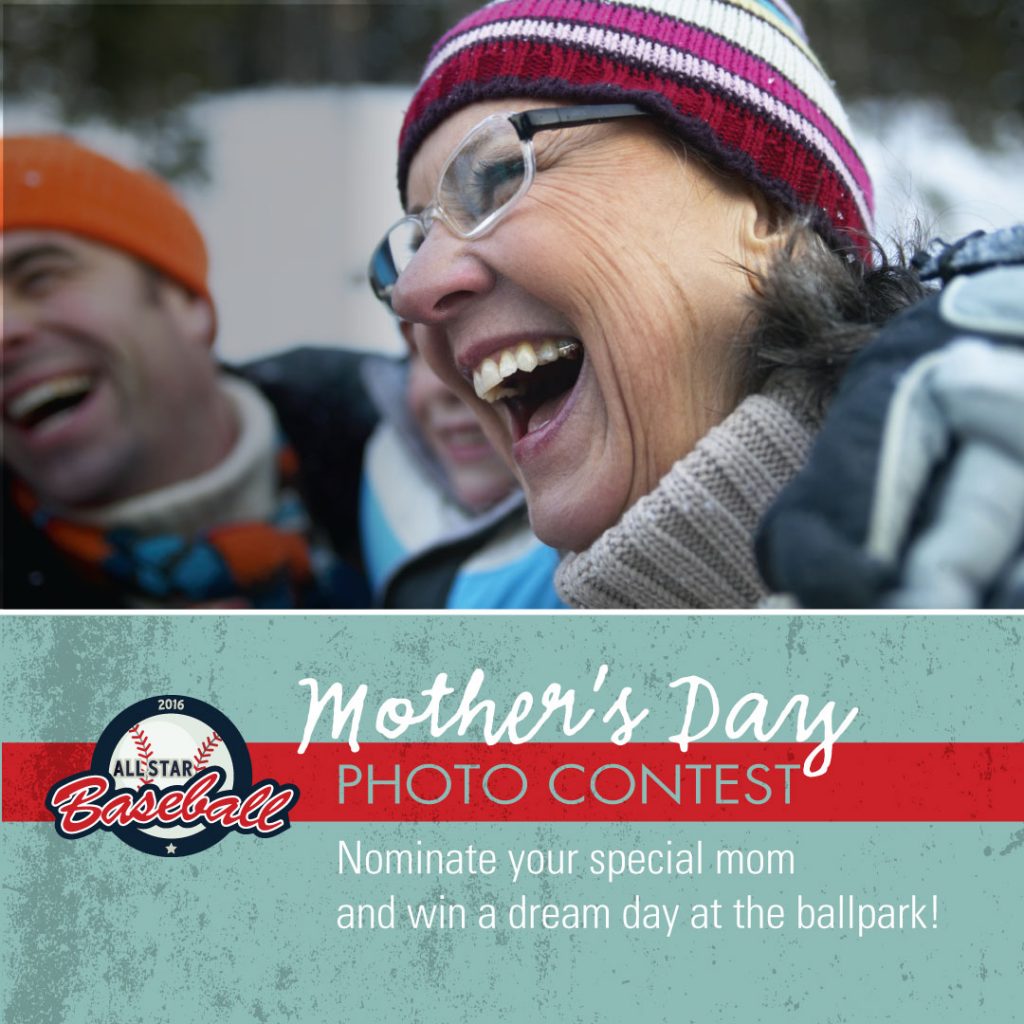 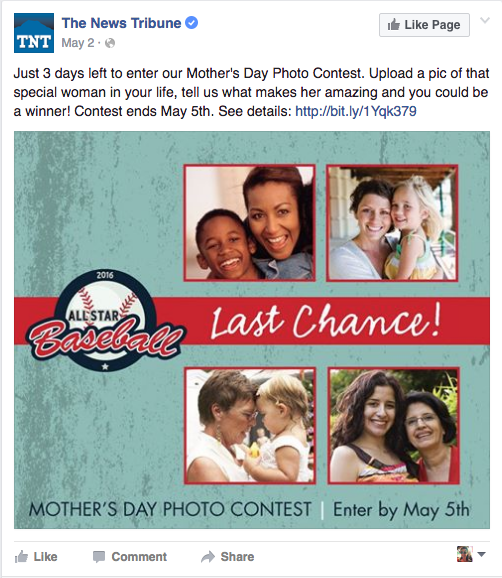 Once the photo contest was over, we published a print ad in our paper announcing the winner. We love sharing stories about the winners of the contests – it boosts the credibility of our paper’s contests and drives engagement for future campaigns. Plus, we were sure to include the web address to get to the contest page.

We also sent a winner announcement email similar to the print ad with a clear call-to-action to go to our baseball contest landing page for more contests.

Baseball is a perfect theme for Father’s Day promotions. We reached out to our local minor league baseball team – the Tacoma Rainiers – with a sponsorship opportunity. Taking advantage of our current partnership together, they were thrilled to be a part of it. To participate in our art contest, users would submit a coloring page with a write-up about a special father figure in their life.

We advertised the art contest in many avenues including an invitation email, website banner ads, and Facebook. Also, because of our ongoing partnership with the Tacoma Rainiers, we had the opportunity to host two events on-site in the stadium during games where we set up coloring tables, handed out our coloring pages and crayons and encouraged kids to participate. Over 50% of our entries were received through our on-site events. Finally, we had additional advertising within the program at the games as well as the Tacoma Rainiers cross-promoted the contest through their social media channels. 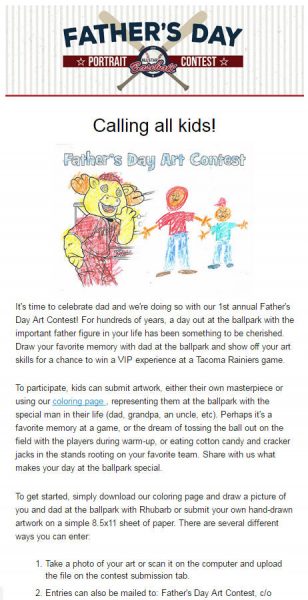 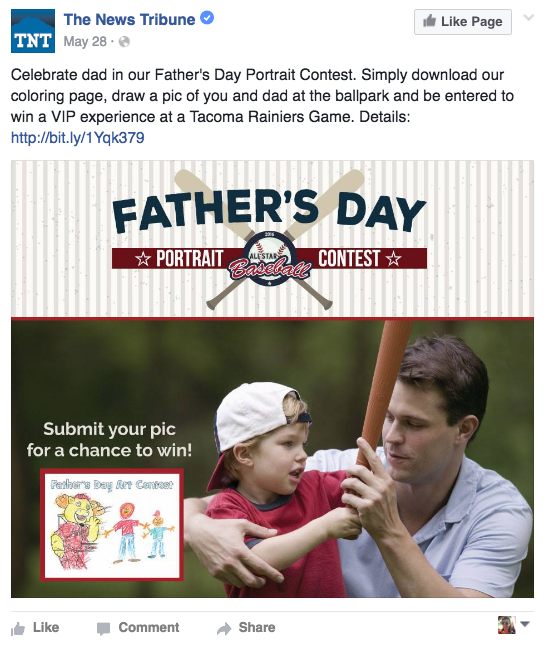 The 3 sets of winners each received four tickets to a luxury suite experience at a Rainiers game, a Rainiers gift pack, a personal visit from the mascot, $100 gift card to the team shop, and an on-field experience. To announce the winners of our Father’s Day art contest, we published the top three entries in The News Tribune. 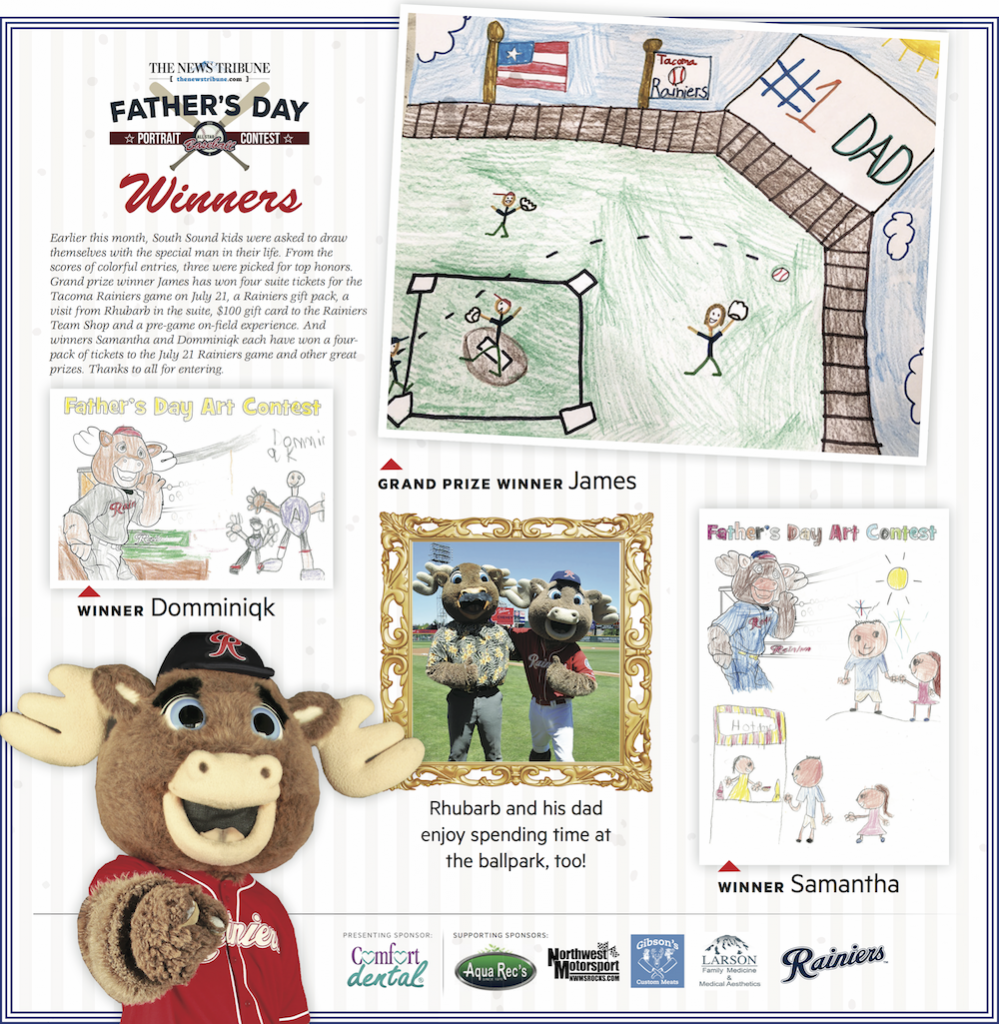 While many of the other aspects of our baseball campaign had a more limited timeline, we created three baseball quizzes as long-running content for our contest page throughout the entire baseball season.

People love quizzes, and with these three being turnkey quizzes, they were a snap to put together and to run on our site. All we had to do was customize them to feature our advertisers, and they were good to go for our landing page.

Nothing says summer more than baseball and barbecue. The last aspect to our baseball campaign was the Ultimate Grill Giveaway. Some of our top contests in the past were sweepstakes so were hoping to provide our sponsors with one final branding push towards the end of the baseball season.

The whole campaign has been a big win for us! We’re absolutely thrilled to be able to land $200,000 in revenue. It’s the most revenue we’ve ever generated from one campaign.

Having a landing page to house all our baseball campaign content has directly lead to an increase in engagement numbers. The Mother’s and Father’s Day contests brought in nearly 150 entries, the grill giveaway had over 5oo entries, and our baseball fan survey has nearly 800 entries.

And while this is all a big success for us, it’s a huge win for our sponsors too. They tell us they see greater value and ROI for their sponsorship investment because of the extended branding opportunities all season long. We’ll be sure to reach out to these advertisers with future bundled sponsorship opportunities.

Kate is the Digital Product and Operations Manager for The News Tribune. With over 16 years in the digital advertising space, Kate and her team of savvy superstars are developing unique opportunities for their clients including a promotions and interactive content strategy to accelerate digital revenue growth.