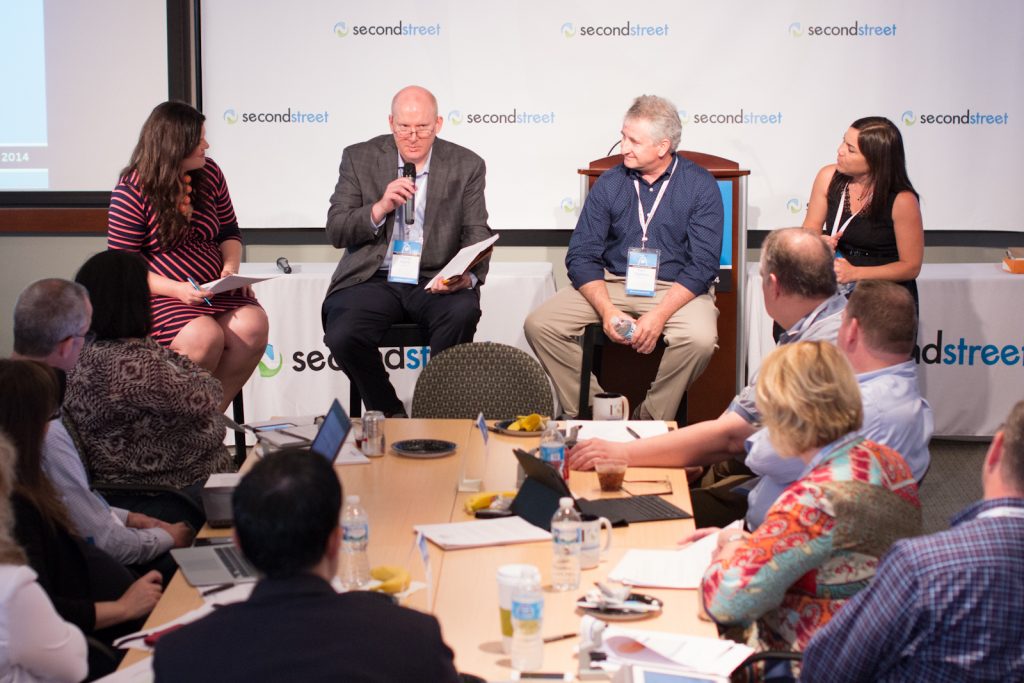 The sold out Promotions Summit is continues today, and we’re so excited to have so many fantastic media companies joining us and sharing their successes with online promotions.

Since the summit is sold out and we wanted to make sure that you don’t miss a thing, we’ll be adding quick recaps of each session to this journal throughout the day. Keep checking back for the most recent content!

Plus, we’ll be live tweeting the Promotions Summit – follow @secondstreetlab on Twitter to get live updates, and join the conversation at #PromotionsSummit.

Let’s get back into it.

10:00 AM: Sales Strategies for Success

The second day of the summit kicked off with a panel discussion featuring Kent Oglesby from KY3-TV, Marty Carry from the State Journal-Register, and Brandy Carter from Entercom New Orleans. The conversation covered all aspects of the sales process, and you can see a few of the highlights below.

11:30 AM: Promotional Opportunities That Drive Results

Joe Mullen from the Milwaukee Journal Sentinel shared how the paper’s Golf Card has brought in more than $85,000 in revenue, and then Second Street’s Affiliate Success Manager Liz Crider went through a few more card case studies – WISE & WPTA-TV generated $112,000 in revenue with a golf card, and UpNorthLive.com’s spa card made $16,000 for the station – in just 11 hours!

In this section, Vince Johnson, formerly of The Signal, shared how the small-market newspaper’s Best of Santa Clarita Valley ballot generated $75,000 in print and digital revenue. He was followed by Marty Carry from the State Journal-Register, who revealed how the paper’s Readers’ Choice exceeded $120,000 in revenue.

Vince Johnson returned again to share how The Signal‘s Prep Football Fans’ Choice Awards generated $4,000 in all digital revenue for the paper. Marty Carry also stepped up again, this time to share how the State Journal-Register‘s State Fair Top Ten ballot helped build the paper’s relationship with the fair and led to new partnership opportunities (get all the details in this case study). The last speaker in this section was Jamie Kinnaird from BH Media, who shared how The Roanoke Times‘ Best of Holiday Shopping niche ballot drove more than $70,000 in revenue.

Katie Wilson from the Quad-City Times detailed how the paper’s Ultimate Man Cave giveaway brought in $8,000 from 8 SMB advertisers. Then Max Media shared how they made $12,000 with a Facebook promotion for a local mall.

Matt Nystrom from Saga Communications explained how the group put together a group-wide sweepstakes – Keyword for Cash – that not only increased tune-in, but also generated more than $60,000 in revenue.

Alex Fuentes shared how the Miami Herald dealsaver program has generated more than $580,000 in revenue with deals stores since 2012. These included a university-themed deals store that drove more than $50,000 and a a Best of Deals Store that brought in $116,000.

Marty Carry returned again, this time to go through The Marty Carry Pro Football Contest Model, which has allowed Marty to consistently bring in six-figure revenue with football contests in a variety of markets. Jamie Kinnaird from BH Media also returned, to explain how The Roanoke Times‘ Fearless Forecasters college football contest went from a small newsroom initiative to a promotion that brought in $68,000 in largely incremental revenue.

Sandy Hurley from Civitas Media detailed how The Daily Advocate integrated a contest with the paper’s Fair Magazine special section – and made $100,000 in revenue as a result. These are incredible results for a small market! Conan Gallaty from WEHCO Media shared how the group successfully integrates promotions with a number of live events (learn more about how promotions can power your live events here), and Terri Overby from WRAZ-TV rounded out the session, explaining how the station drove over $200,000 in revenue with a high school lip dub contest.

The next session of the summit featured a variety of roundtables where attendees could meet to brainstorm strategies and ask questions about a topic of their choice. These were the options:

For the second group activity, summit attendees divided into 10 teams of 10 to craft a 3-month promotions campaign for a specific advertiser, either a football team, a pizza restaurant, or a credit union.

Everyone voted on the proposals, and the winning team received a fun prize.

The summit wrapped up with a few final words from the Second Street Presidents and Co-Founders, Matt Coen and Doug Villhard. They challenged not only the summit attendees, but also all of you reading along from home, to continue to build ever bigger, better, and bolder promotions.

Matt is one of the Co-Founders and Presidents of Second Street. He started his career in media technology at Pulitzer Technologies as Director of New Business and Product Development. When Matt isn't traveling and speaking at media industry events, he's cheering on New England sports teams, reading, and spending time with his family.