Music To My Beers is a weekly podcast about beer and music that we launched in 2015. The show is also broadcast on Sundays on our station WRBR-FM (103.9 The Bear.) Every March we host a basketball-themed beer awards show.

With the new voting brackets functionality on Second Street, we saw this as a great opportunity to get our listeners more deeply involved with our show. We also saw tremendous value in getting to know more about our listeners through data collection.

As March approached, our hosts Zach and Kluck decided on Beer Bracketology – a bracket to declare the best brewery in the nation. This would give them interesting content to debate about in the podcast as well as be highly engaging to their listeners. 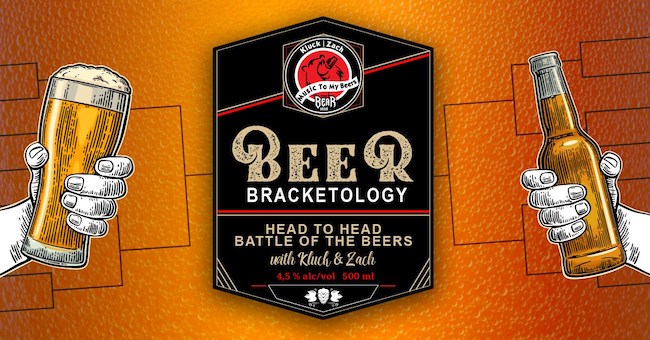 At this same time, we wanted to promote the Music To My Beers private Facebook Group. This was a perfect opportunity to tie the two initiatives together. We needed to pick the contenders, so Zach and Kluck directed listeners to the Facebook Group to submit their favorite breweries. 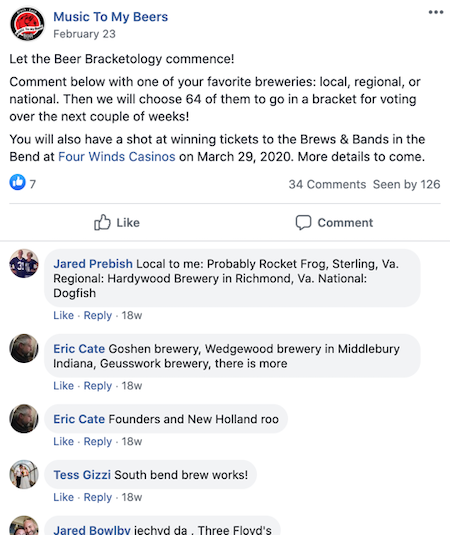 From the listeners’ suggestions, we narrowed our list to 32 breweries (local, regional, and even a few national ones.) Each of our five rounds were planned to run for about four days between March 1st and March 20th. 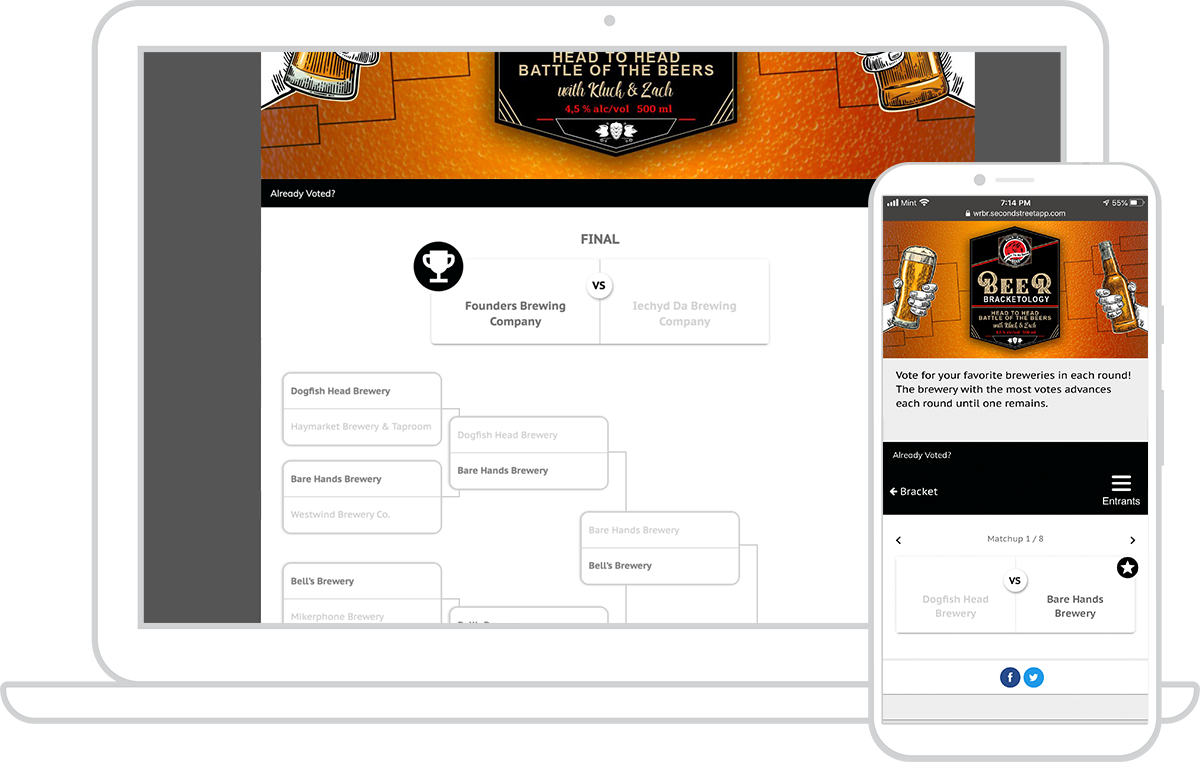 Beer Bracketology was a main discussion point for the hosts of the podcast throughout March, and they invited listeners to vote for their favorite breweries in each round. Each week, the hosts debated the matchups – which brewery wins were major upsets and who was the Cinderella story of the tournament. 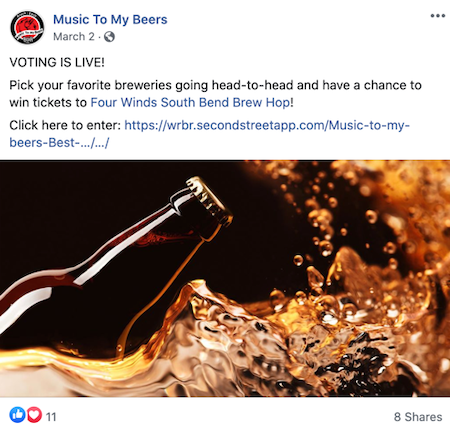 In other years, the discussion was entirely between our hosts, but this year our listeners had the chance to really voice their opinions. It provided a meaningful opportunity to connect with our audience and make them feel like part of the show.

Since we wanted to use this promotion to grow and expand our database, we optimized our registration form accordingly. We included an email opt-in for the Music To My Beers monthly newsletter, other WRBR newsletters, and a question to learn more about our listener’s beer interests. 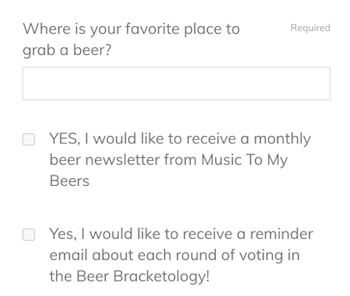 While we drove a lot of participation from mentions during the podcast, we also had a strong email campaign. Each week we sent an email to a segmented audience. Our targeted audience included: 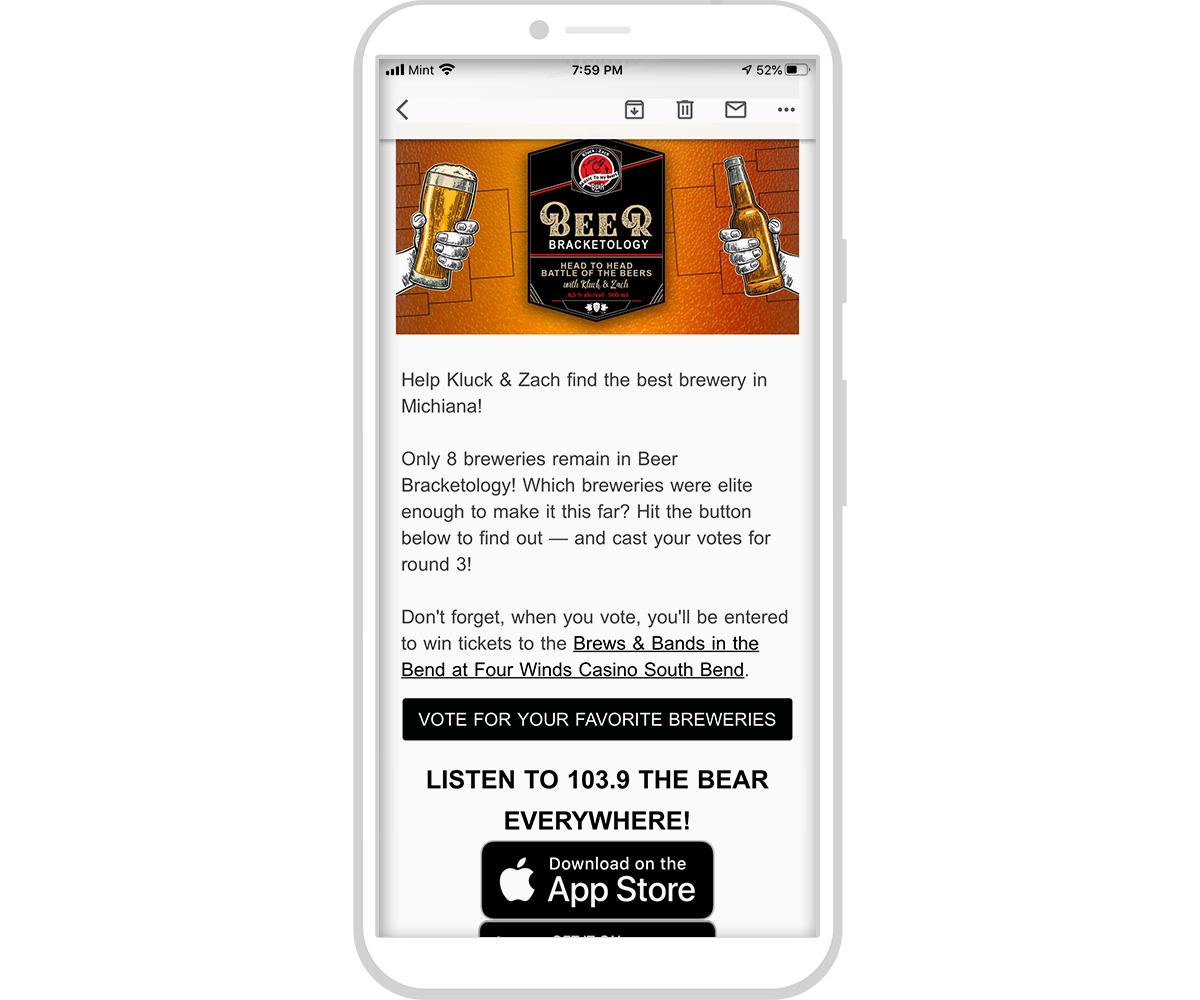 Beyond this email campaign, our hosts posted on the Music To My Beers Facebook page and the private Facebook Group, as well as their personal social media pages. We also ran various ads throughout our station website and ran on-air spots on WRBR.

Like most of us, one thing we hadn’t planned on was the cancellation of the college basketball tournament due to COVID-19. While this may have been difficult for other stations to roll with, we were fortunate our bracket wasn’t affected. In fact, with the absence of a college tournament to play in, we felt our participation grew.

By the time it was over, Beer Bracketology collected over 4,300 votes! 100 people signed up to receive the Music To My Beers monthly newsletter, and our other station newsletters grew by over 500 email addresses. We also saw a definite increase in activity and membership in our Facebook Group and a boost in overall social media engagement during the campaign.

The success of the Music To My Beers bracket has encouraged us to start integrating more promotions into the marketing and audience-growth tactics of our other podcasts. We look forward to seeing many creative promotion ideas in our future.

Krystal Vivian is the Director of Digital Content at Federated Media. Krystal manages all digital content initiatives for Federated Media and Federated Digital Solutions. She coaches content creators on how to produce compelling and engaging multimedia content. She helps her sales team develop successful content marketing campaigns for their clients to maximize audience engagement and ROI.